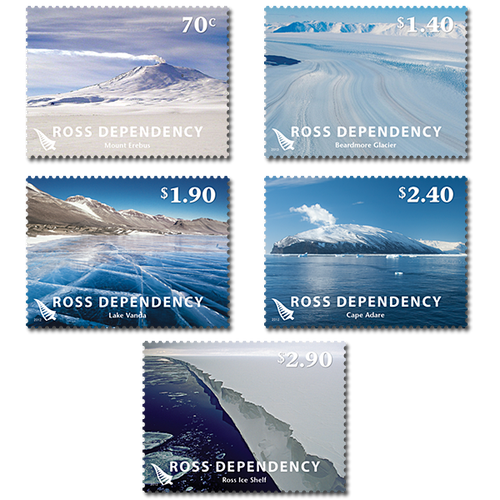 One of the largest glaciers in the world, exceeding 160 kilometres in length, the Beardmore Glacier descends from the south polar region of the Antarctic Plateau to the Ross Ice Shelf, dividing the Transantarctic Mountains. Ernest Shackleton's 1908 expedition discovered and climbed the glacier.

With salinity more than 10 times that of seawater, Lake Vanda is one of the world's most hyper-saline lakes. It is permanently covered with three to five metres of transparent ice, is five kilometres long and has a maximum depth of 69 metres.

Separating the Ross Sea to the east and the Southern Ocean to the west, Cape Adare is the north-easternmost peninsula in the Ross Dependency and East Antarctica. It is also the site of the largest Adélie penguin rookery in the world.

The Ross Ice Shelf is the largest ice shelf in the world. It consists of a thick plate of ice fed continuously by glaciers, and much of it remains frozen all year round. The shelf was named after James Clark Ross, who discovered it in 1841.

Check out the full range of international stamps here.