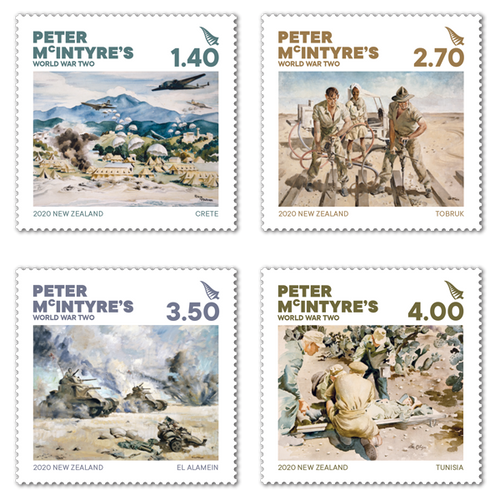 After his appointment, McIntyre’s first commission was to paint a portrait of the King of Greece, George II, a recent evacuee to the island of Crete. McIntyre painted scenes in Crete including bombings, paratrooper invasions of the General Hospital, and airborne attacks, but many of the works were left behind.

Tobruk, Libya was the next destination for McIntyre and the New Zealand Division after the disasters in Crete and Greece. It was near Tobruk that McIntyre would depict scenes focusing on the critical role that rail played in the supply of desert troops. This is one of a number of McIntyre’ paintings that focused on individuals’ practical efforts.

McIntyre, who was shadowing New Zealand troops in Egypt, sketched these “Grant tanks” powering slowly but steadily forward during one of the two Battles of El Alamein (these were costly engagements for New Zealand, but also the turning point of the North African campaign in the Allies’ favour).

In 1943, McIntyre accompanied the New Zealand Division as they fought alongside the British X Corps in Tunisia, North Africa. McIntyre illustrated the final surrender after the successful Operation Supercharge II and the eventual defeat of the Axis in Tunisia in May, depicting a medical officer attending wounded Germans among Tunisian cactuses.