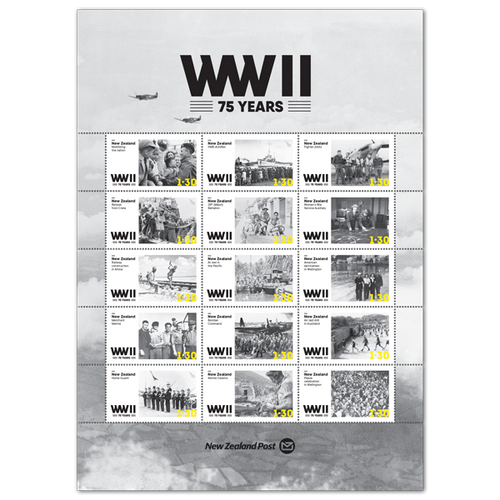 A soldier is met by a group of children in Wellington after his return from the Middle East on a hospital ship.

In Auckland, crowds turned out to welcome HMS Achilles, returning to New Zealand after the Battle of the River Plate.

New Zealand fighter pilots beside a Supermarine Spitfire in England, 15 July 1942. A single-seat fighter, the Spitfire established a formidable record during the Battle of Britain. It remains an iconic aircraft.

An injured soldier assisted off a ship in Alexandria, Egypt, after the evacuation from Crete.

Members of the 28th (Māori) Battalion driving through the Italian town of Sora, 3 June 1944. They are (from left): Kiwi Cribb, David McClutchie, Whiwhi Winiata, Repoma Thompson and Dick Huata.

Women from the Auxiliary Army Corp worked on a wide range of war-critical jobs as part of the defence effort at home.

Members of the 3rd Division at ease at Vella Lavella, located in the Solomon Islands, c. 1944.

Members of 75 (NZ) Squadron at RAF Feltwell, England. They are passing a Wellington (Mk I), a four-crew, medium bomber that served as one of Bomber Command’s principal bombers in the early years of the war.

Members of the Home Guard training in Waikato. Lacking uniforms, they have been issued with identifying armbands.

Gordon Reid of the 4th Armoured Brigade in the ruins of Cassino, 18 May 1944. He is operating communication equipment and sits beside a Sherman tank.

A Wellington crowd on VJ Day, 15 August 1945, celebrating the end of the war.