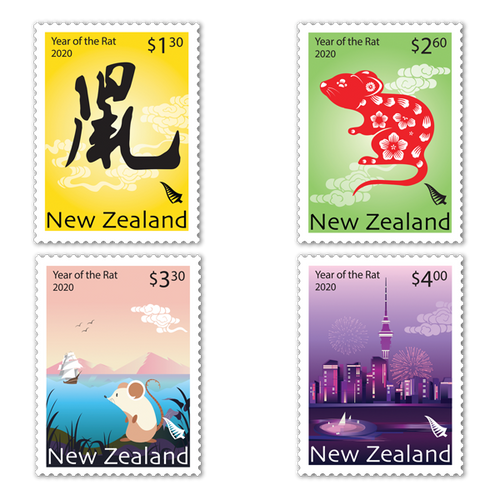 Chinese calligraphy is the art of writing Chinese characters with a brush. It’s a key part of Chinese culture, traditions and everyday life. Couplet writing and calligraphy continue to have an essential role in Chinese New Year celebrations today, and feature in the design of this year’s $1.30 Year of the Rat stamp.

Chinese paper-cutting is a type of folk art that has been part of Chinese culture for thousands of years. Paper-cutting art is known to be very intricate, with clever use of negative space. While used mostly for decorative purposes, paper-cutting is a common art form for Chinese New Year decorations.

The ship rat is the most commonly found rat in New Zealand, having stowed aboard the vessels of early European settlers. Common on New Zealand’s main islands, the rat poses a threat to native species who are vulnerable to this imported predator. This stamp celebrates the spirit of the Rat in the Chinese zodiac.