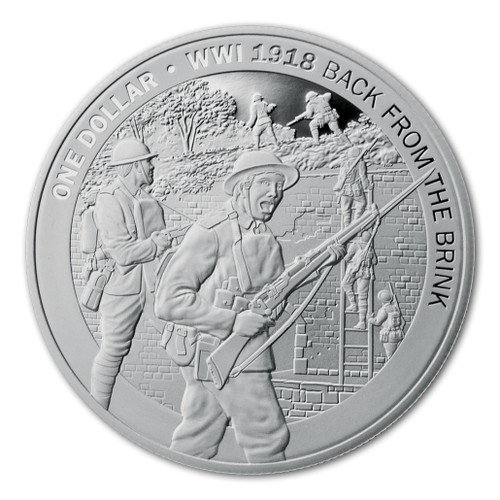 The French town of Le Quesnoy had remained in the possession of the Germans for the majority of the war. It wasn’t until 4 November 1918 that brave Kiwi soldiers scaled the walls and took the remaining Germans as prisoners.

The last major action of New Zealand during the war was to liberate Le Quesnoy. To this day, New Zealand is still honoured throughout the town for the huge role our country played. Street names carry New Zealand Place names, a primary school has the name of a New Zealand soldier and there is a memorial for New Zealand. Although the taking of Le Quesnoy was the Kiwis' last push, it was far from the only one. All along the Western Front Kiwis had played a major role and fought heroically in hellish conditions.

The coin depicts a company of soldiers as they begin the dangerous climb up and over the walls of Le Quesnoy on 4 November 1918. The French town had been a stronghold for the Germans throughout the entire war, but thanks to the Kiwis, that was about to change. Minted from 0.999 silver, this coin is a sobering reminder of the danger inherent in New Zealand’s contribution to the war.

1918 Back from the Brink Miniature Sheet Booklet

1918 Back from the Brink Gold Proof Coin