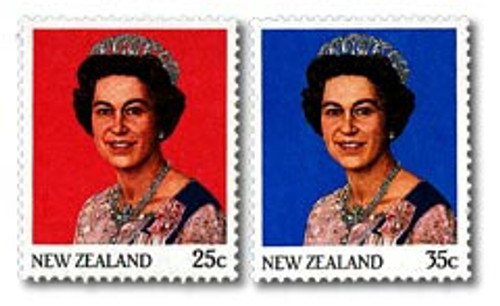 Arising from increased postage rates, two new definitive stamps were issued in July 1985. Each stamp featured Her Majesty the Queen Elizabeth II with the design being adopted from a portrait taken by Peter Grugeon of Camera Press, England. The 25c gummed stamp featured the portrait of the Queen against a red background and the 35c stamp featured the portrait of the Queen against a blue background. The tiara worn in the portrait was inherited from Queen Mary and was Russian in origin and featured circles of diamonds with interchangeable pearl drops in the centre. The necklace was the Jubilee necklace worn made for Queen Victoria's Golden Jubilee, 1887.

The Queen was also depicted wearing the sash of the Order of the Garter and the Royal Family Order of King George VI and also the Queen's Service Order, instituted in 1975. The Order, and associated Queen's Service Medal, are distinctive to New Zealand but an integral part of the Royal Honours System.