2005 The Chronicles of Narnia - The Lion, The Witch and the Wardrobe Brilliant Uncirculated Coin Set - Character Pack 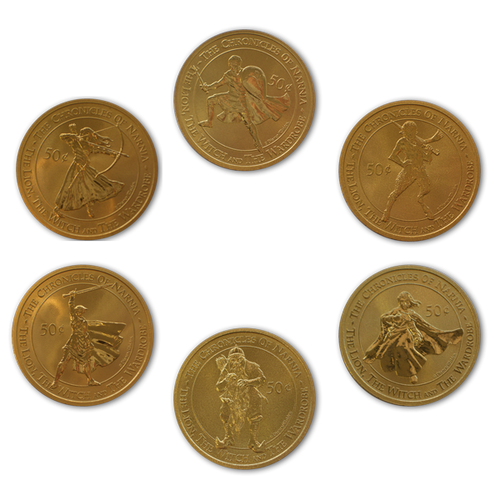 2005 The Chronicles of Narnia - The Lion, The Witch and the Wardrobe Brilliant Uncirculated Coin Set - Character Pack

These six brilliant uncirculcated coins were told the story about beloved characters from this timeless, classic tale.

Struck to the exceptionally high standards of the Royal Australian Mint, these six brilliant uncirculcated coins were packaged together as a set in a collectable display card including information that told the story about each of the beloved characters that were featured:

When Mrs. Pevensie sends her children to the country, she gives her eldest child a great responsibility. ‘Look after your brother and sisters’. Upright and honest, Peter takes his mission seriously, but doesn’t always know how best to accomplish it. His attempts to rein in his brother leads to Edmunds betrayal. Edmund goes missing and its Peter’s sworn duty to get him back. Peter faces a growing and even greater responsibility, the saving of Narnia. As the future High King, it is up to Peter to lead Aslan’s army in battle against the White Witch.

The second eldest child, Susan is the arguably brightest and wittiest, yet most sceptical of the Pevensies. She is logical and realistic to the point of being a bit annoying to her siblings. Even after Susan enters Narnia, she can’t quite bring herself to believe in it. She certainly doesn’t believe she’s been called there to save the country and be its Queen. But Susan’s trails will have a profound impact on her, causing her to realise that life can’t always be reasoned out. Sometimes, it’s more important to feel than to think.

Edmund is the third child and the most restless. Bright and charming when he wants to be, Edmund chafes under his brother’s authority. His rebelliousness is a way of masking the White Witch is grounded in his need to be accepted and nurtured. Just as Edmund makes the greatest mistake in Narnia, he undergoes the greatest transformation. His adventures (and his suffering) allow him to develop from a selfish boy into selfless warrior. He saves his brother on the battlefield, allowing himself to fall to the Witch’s wand...

The youngest, Lucy is trusting and open with an unshakeable belief in the goodness of things. Her enthusiasm and innocent hope make possible her family’s entrance into Narnia. Whilst her older siblings are reluctant to dive into the magical world, Lucy is unafraid. She has the closest connection to Aslan heeding his wisdom and understanding his sadness. Lucy feels the most pain when he is called to make the ultimate sacrifice. Finally, she is willing to fight, and will be called upon to heal - curing Edmund of his wounds with her magic vial, then healing her once fractured family.

The faun, Mr. Tumnus, half goat and half man, is the first person Lucy meets as she arrives in Narnia. He invites Lucy to his home for tea, after which, he reveals that Lucy cannot return home. He is a servant of the White Witch, the horrible ruler of Narnia, who has cast a spell over the land so that it is always winter and never Christmas. Mr. Tumus is good and kind and may begin in the service of the White Witch, but as soon as he understands the true nature of his duty his inherent goodness prevails.

Ginarrbrik is the White Witch’s dwarfish, malevolent sleigh driver and “inner circle” servant. Ginarrbrik is an intriguing looking character with his long unkempt beard, bushy eyebrows and his full length fur lined jacket. His fingers are adorned with heavy rings and a red hat with flaps that extend down to past his shoulders sits atop his head. He is all too happy to carry out the White Witch’s every evil whim. He is notably present when the White Witch first encounters Edmund Pevensie and tempts him as an unwitting participant in her plans.