2005 The Chronicles of Narnia - The Lion, The Witch and the Wardrobe Gold Proof Coin - Aslan 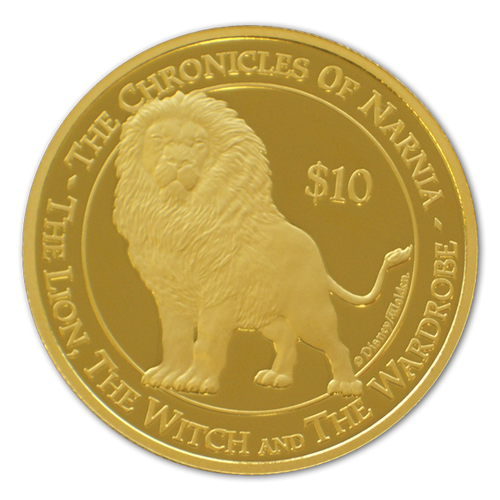 2005 The Chronicles of Narnia - The Lion, The Witch and the Wardrobe Gold Proof Coin - Aslan

This 24-carat gold proof coin potrayed an image of the great and powerful lion Aslan.

The Great Lion, the King of the Wood, Aslan radiates solemnity and joy, strength and gentleness, fury and tenderness. When the children first hear Aslan’s name, they feel hope. When they first see him, his golden power nearly overwhelms them. But when he speaks their names, they know they have met their greatest and truest friend. His wisdom and compassion are as boundless as his courageous heart. And in the end nothing - not even the dark payment the White Witch demands of him - can bind him or contain his power.

This 24-carat (99.9%) gold proof coin had been struck to the highest possible quality by the Royal Australian Mint.

The reverse of the coin displayed a carefully crafted image of Aslan the lion, a character from The Chronicles of Narnia - the Lion, the Witch and the Wardrobe; with the obverse containing Ian Rank-Broadley’s effigy of Her Majesty Queen Elizabeth II.