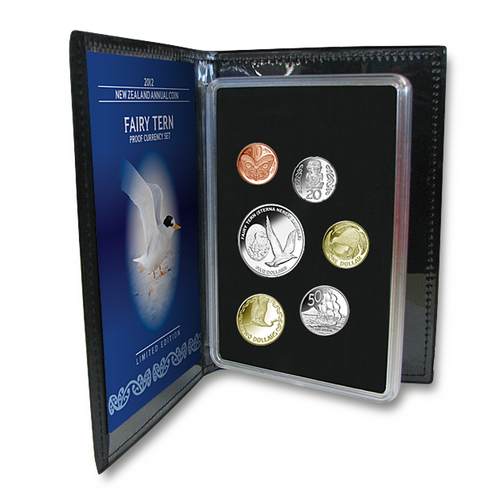 If you seek only the best, order the 2012 Fairy Tern Proof Currency Set!

The six iconic designs in this proof currency set are:

The $5 proof coin has been struck from 0.999 silver in proof quality. The epitome of elegance and craftsmanship, it features the New Zealand fairy tern in three-dimensional glory, both as a bird in flight and in its natural nesting habitat. The mother and chicks are depicted in an egg-shaped vignette to reinforce the importance of every egg to the species survival, as it strives to overcome the everyday threats to its existence.

The ten cent coin features a Māori carved head or ‘koruru’ with Māori rafter patterns. Koruru are usually mounted on the gables of wharenui (meeting houses) and are referred to as ‘The guardians of the house’.

The Māori carving shown on the 20 cent coin is a reproduction of a specific carving of an 18th century Māori warrior leader called Pukaki, who was a rangatira (chief) of the Ngati Whakaue iwi of Te Arawa in the Rotorua district. The carving was made in 1836 and today it can be viewed in the entrance to the Rotorua District Council building. The edging of this coin is distinctive and known
as ‘Spanish flower’.