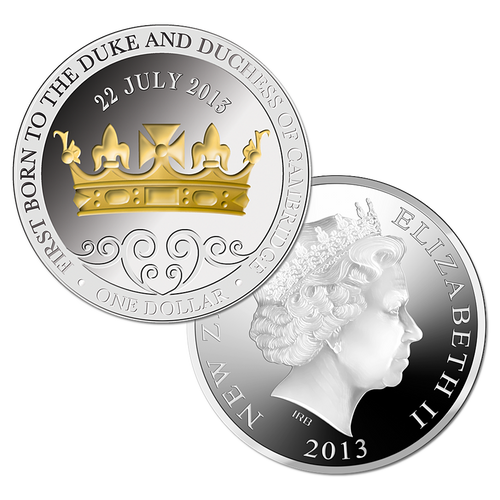 Such a significant occasion as the birth of a royal heir deserves a truly special coin. This issue was very popular with the coin selling out fast.

Features the 'Princely Coronet' in gold plating
A stylised koru design symbolising new life adds a New Zealand touch to the design.
The date of birth of H.R.H. Prince George of Cambridge is engraved on the coin
Minted from 1 troy oz 0.999 silver
Low worldwide mintage of 1,500.

The intricate design features the Princely Coronet in gold plating. The Princely Coronet is a type of crown that's assigned to the children of Heir Apparent (Prince of Wales), which includes Prince George's father, the Duke of Cambridge. The detailed design also features stylised koru – a pattern used in Māori and New Zealand art to symbolise new life.