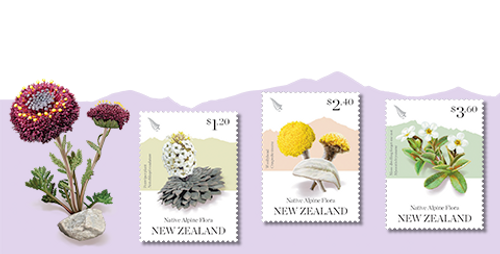 For many years, the origins of New Zealand’s native alpine flora were shrouded in mystery. At a youthful 2-10 million years old, New Zealand’s alpine areas are comparatively new, formed well after the break-up of Gondwanaland. Before shifting tectonic plates heaved much of New Zealand’s terrain into colder altitudes, the landscape was largely low-lying and warm.

Although scientists haven’t yet told all their stories, New Zealand’s alpine plants appear to be much younger than the land mass, representing rapid and spectacular evolution and diversification.

Botanists have evidence that immigrant ancestors of alpine plants dispersed to New Zealand quite recently from Australia, New Guinea and South America. Some might have come from or via Antarctica, which was home to rich flora only a few million years ago. Equally adventurously, other species appear to have evolved from native lowland plants that adapted to alpine environments as the landscape shifted.

The miniature sheet featured an illustrated mountain landscape evoking the Southern Alps, where many of New Zealand’s unique alpine plant species can be found. The first day covers displayed continuations of this illustration.

This pack taught you more about the phenomenal evolution of New Zealand’s native alpine flora. You could discover the unique characteristics of New Zealand’s most intrepid plants, and the story of their rapid and spectacular evolution and diversification.