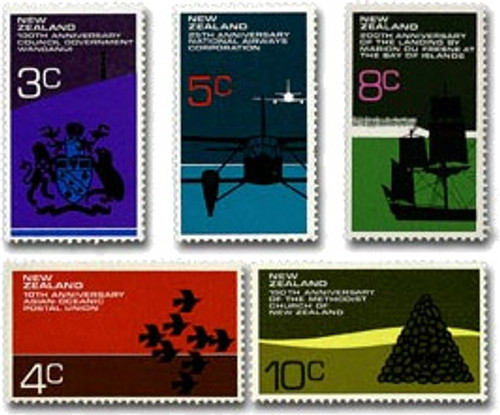 This 1972 Commemorative Stamp Issue marked the anniversaries listed below.

Centenary of Local Government in Wanganui - 3c
The Borough of Wanganui was formed in February 1872, the town was originally called "Petre" but this was unpopular and the original Maori name Wanganui was adopted in 1854.  The town received city status in 1924.  The design features the city crest against a backdrop of Durie Hill with its memorial tower.

The 10th Anniversary of the Asian-Oceanic Postal Union - 4c
This organisation was formed at a meeting in Manila in 1962 with the object of co-operation in postal services of member nations - Australia, New Zealand, Taiwan, Japan, South Korea, The Philippines, Laos and Thailand.  The design depicts eight stylised birds representing the members.

The 200th Anniversary of the Landing by Marion du Fresne in the Bay of Islands - 8c
In April 1772 the two ships of this expedition anchored in the Bay of Islands.  The Maori were friendly and camps were set up on Moturoa Island.  On 6 June du Fresne and 13 men went to visit a neighbouring village but were never seen again. The following day 12 men went ashore to search but only one returned.  It is believed the French may have violated a native tapu.  The design incorporates a silhouette of a 22 gun French frigate together with a portion of the Maori palisade at Motorua.

Christmas 2020 Set of Self Adhesive Booklets