Back in 2001, NZ Post set out to celebrate the upcoming release of The Lord of the Rings: The Fellowship of the Ring. Designed by Sacha Lees, the stamps combined images of scenes from the film with imagery evoking the mythology and magic of its setting. Lees had spent the previous few years working for Weta Workshop as an illustrator, airbrush artist, creature designer and concept artist for the trilogy. Two decades on, the award-winning artist embarked on a new journey with NZ Post to celebrate a masterpiece. 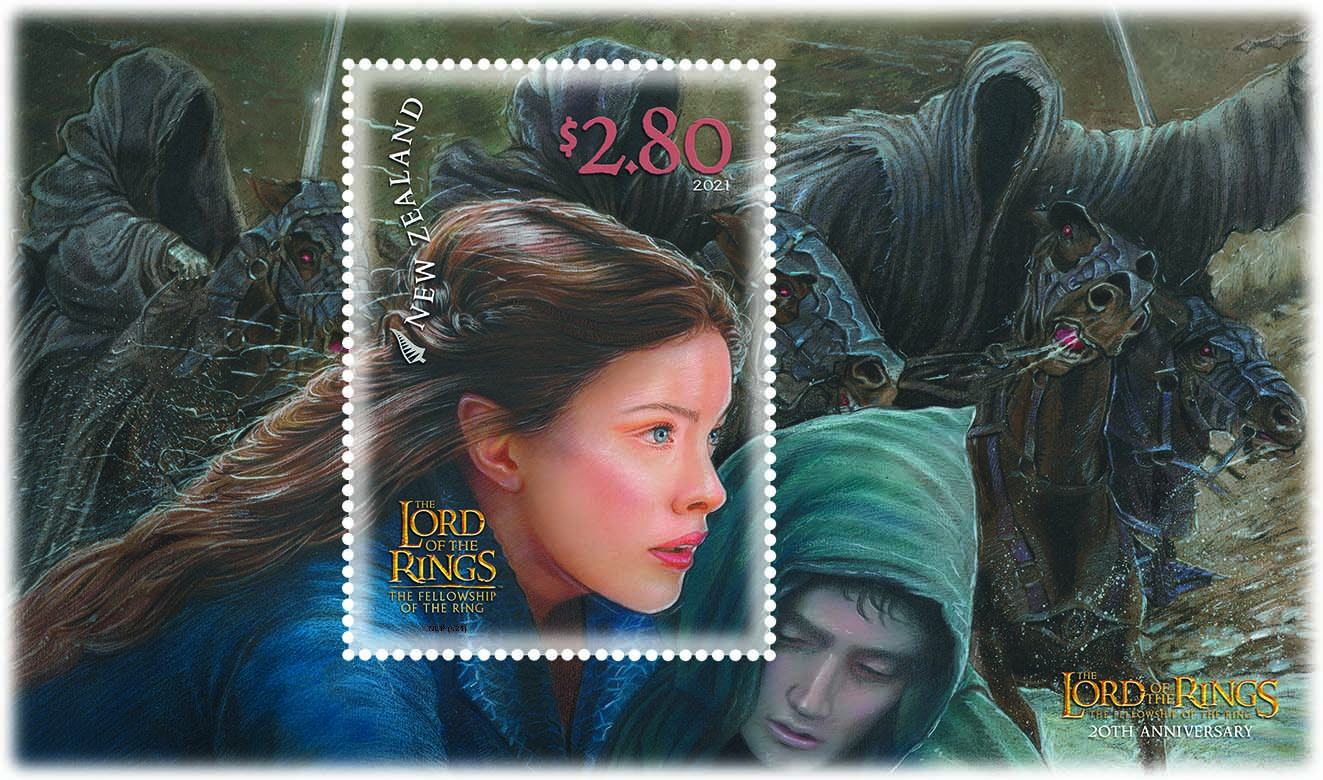 'Flight to the Ford' miniature sheet, painted and designed by Sacha Lees

You have spent many years of your life working on projects relating to The Lord of the Rings, including the films. What was it like to be behind the scenes?

Intense, hard work, long hours, fun. The time during the creation of the Lord of the Rings trilogy was incredibly and intensely focused and both physically and mentally demanding. I loved that Weta was a very small company, which meant I was able to cross over artistic disciplines working on all aspects of the films, from storyboarding, designing and prop, set and prosthetic production to on-set filming. Somehow I even found myself puppeteering big rigs for hobbit-scale effects and hand acting in the Gollum torture scene.

The variety and the need for creative problem-solving ticked all the boxes for me. New Zealand’s film industry was in its infancy, providing a wonderful opportunity for an artist like myself, new to it, to work alongside like-minded international artisans at the top of their fields.

How did you decide on the scenes to include in the NZ Post stamps?

I began by sketching what I felt were iconic scenes and notable characters from the first film. There were so many it was hard to stop. Once the NZ Post team had reviewed the drawings it was difficult to narrow them down to six, but ultimately we decided on a set that represented key points of the film’s narrative and that complemented each other and worked well in a stamp format.

What was your method in creating the stamps? Why not just use photos?

I felt that to be faithful to the aesthetics of the film it would be best to illustrate these iconic scenes through a hand-painted medium. This also allowed the capture of a large part of the narrative. The medium of film gives your imagination the ability to fill in the detail, but it does not translate well into a stand-alone image. For example, a screengrab of the epic Gandalf vs. Balrog battle scene, due to its motion in the footage, is mostly a blur. Extrapolating out sequences and composing them together allowed for a more pleasing representation to be achieved.

I am grateful to the NZ Post team for allowing me to explore this approach and being so open to different ideas. 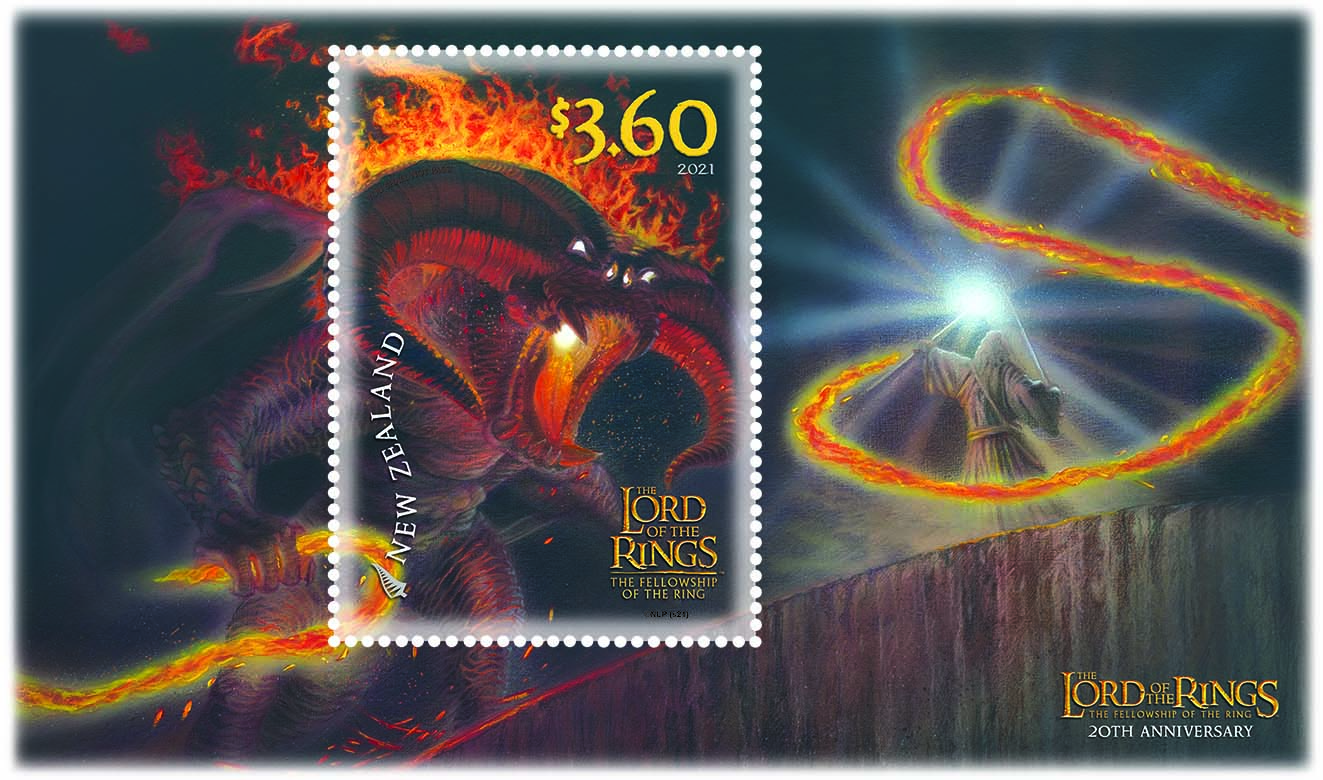 'The Bridge of Khazad-dûm' miniature sheet, painted and designed by Sacha Lees

Do you have a favourite stamp? What do you like about it?

That’s a tricky one. I think the colouring and shape of the Balrog (The Bridge of Khazad-dûm) would look striking on an envelope. The hobbits hiding under the tree (Hiding from the Black Rider) is such a memorable part of the film for me. I probably most enjoyed capturing the faces in the stamp The Prancing Pony.

In what ways has working on the Lord of the Rings films affected your life? Has it influenced the type of art you create now?

It was a wonderful way to start my commercial art career. You are working as a conduit for someone else’s vision. It also taught me about creative burnout and the importance of keeping up my own practices to allow myself creative freedom.

In my personal life I met my now-husband while working on the films. I broke my arm while falling from a puppet big-rig he had built. It wasn’t actually his fault and needless to say, I obviously forgave him.

What attracts you to the ‘fantastic art’ genre? What messages do you hope to convey through your art?

I have a passion for the techniques of the great masters and early on was inspired by the surrealist art movement. The fantastic art genre allows me to bring those two loves together. I see fantastic art as encompassing all types of realistic but imaginative illustration, sculpture and fine art, but perhaps it doesn’t have the dated connotations of the scantily clad woman riding a beast and gripping a sword that fantasy art was known for in the 1970s.

Painting for the fine art industry is very different from painting for the film or commercial art industries. Each work I create evolves in its own merit and has its own narrative depending on what I wish to convey. Ultimately the artwork needs to speak to someone who will find it pleasing to hang on their wall. I try to evoke a sense of wonder in my work.

Do you have any upcoming exhibitions?

I am currently working towards a body of oil paintings to be exhibited in Wellington next year. Updates and information can be found on my website www.sachalees.com.

See the full range of The Lord of the Rings: The Fellowship of the Ring 20th Anniversary stamps and coins designed by Sacha.