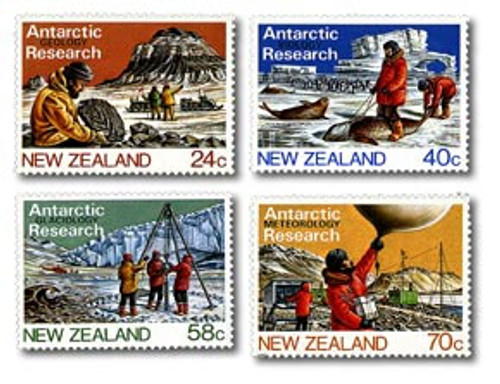 In the last 100 years, 'Terra Australis Incognita', the 'Hidden Southern Land', has been slowly unveiling its secrets after spending a lifetime in forbidding silence. Its 14 million square kilometres of ice and snow is described as being the driest, coldest and windiest place in the world. Yet, undeniably, this cruel continent commands an air of awesome significance and supreme beauty.

On the southern most tip of Ross Island, located on the edge of the Ross Ice Shelf on the Antarctic continent, is Scott Base, established in 1957 to support New Zealand's participation in the International Geophysical Year scientific research programme. Since then it has been continuously occupied by scientists and support staff. Other bases have been established including Vanda Station on the shores of Lake Vanda in the Dry Valley region of Victoria Land on the Antarctic continent proper, and at Cape Bird on the northern tip of Ross Island, 100 kilometres from Scott Base. The seasons govern the population and the work carried out.

This set saluted scientists of all nations working in the Antarctic.

Because of its geographical position, New Zealand has been used as a staging point fro many Antarctic expeditions and this has forged close links with the southernmost continent.  New Zealand's involvement in Antartic is the topic of special stamp issue featuring 4 stamps depicting areas in which some of the most important studies are currently being made - geology, biology, glaciology and meteorology.

Clicl on image to enlarge.