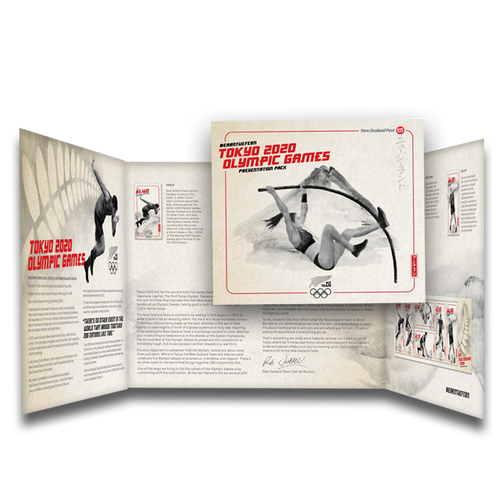 Presentation packs are produced for certain stamp issues and provide in-depth commentary on the subject of the stamps, as well as a selection stamp products. They make beautiful gifts and are a product to be treasured.

Commemorate the efforts of the 2020 New Zealand Team with this issue’s presentation pack, with guest writer Rob Waddell, New Zealand's 18th Chef de Mission for the Olympic Games. Waddell most recently represented New Zealand at the 2008 Beijing Olympic Games and followed this with an America's Cup campaign. He made steady and sometimes startling progress as a rower in the 1990s, and went on to join the long line of outstanding New Zealand single scullers with world titles in 1998 and 1999, capping off his career with a gold medal at the 2000 Sydney Olympic Games. Waddell won the Lonsdale Cup in 1998 and 2000, and was made an Officer of the New Zealand Order of Merit in 2001 for his services to rowing.