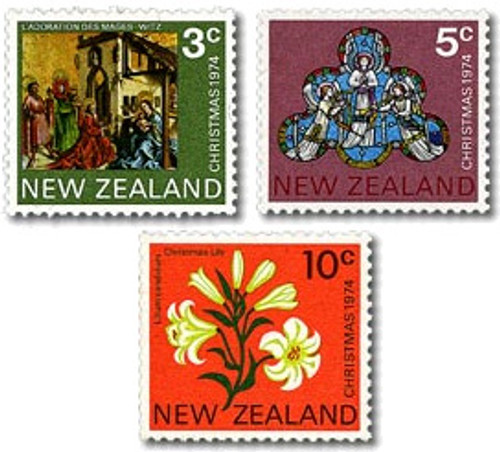 "Adoration des Mages" - 3c
Conrad Witz, the painter, was born at Rottweil in Wurttemburg probably between 1400 and 1410.  The outstanding and highly personal art of Witz failed to attract a large following, mainly because of the prevalent influence of the Flemish masters.  The painting depicts Mary, Joseph and child with the three kings.

Stained Glass Window depicting three angels - 5c
The window is from Old St Paul's Church, Wellington.  St Paul's Church was consecrated by Bishop Abraham on 6 June 1866.  The architect of the Cathedral church was Rev Frederick Thatcher, vicar of the parish from 1861 to 1864.  In the decade after 1883 several additions were made to increase the comfort of the church.  In 1964 the church was closed and two years later offered to the Government.  No longer a parish church nor a cathedral it stands today as a memorial to all who have worshipped in it, a peaceful haven amidst the growing activity around it.