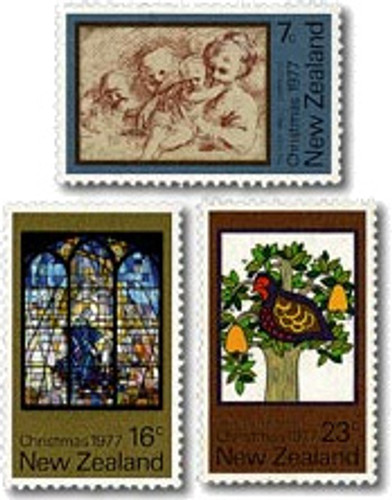 The 1977 Christmas Stamp Issue featured a drawing of the Holy Family, a stained glass window and 'A Partridge in a Pear Tree'.

'The Holy Family',  by Antonio Allegri Correggio (1494?-1534) - 7c
The original of this work hangs in the National Art Gallery, Wellington. The figures on the drawing are:  Mary, the Christ Child, Joseph and another child who is probably the infant St John.  Correggio had been influenced by Leonardo Da Vinci, and Da Vinci often featured the infant St John in his nativity paintings.  Mary was known to have visited St John The Baptist's mother and a number of paintings at this time featured both children.

Stain Glass Window, St Michael's and all Angels Church, Dunedin - 16c
The window depicts the Madonna and Child with the quotation "And the child grew and became strong filled with wisdom and the favour of God was upon him".  The stained glass window is the west window of the church and was designed by Mrs Beverley Shore Bennett of Wellington and made by Mr Roy Miller of Dunedin.

'Partridge in a Pear Tree' - 23c
From the counting song by an unknown author and set to a traditional melody "Twelve Days of Christmas".