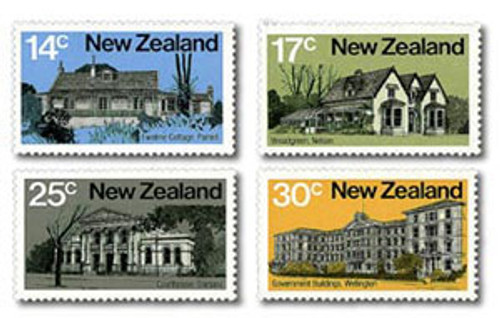 Ewelme Cottage, Parnell - 14c
The cottage was built in 1863-64 for the Rev Vicesimus Lush the first vicar of Howick and his family.  The kauri cottage was eventually purchased by the Auckland City Council and leased to the New Zealand Historic Places Trust.  Restored to its former glory and richly endowed by many of the Lush family possessions, the cottage is open to the public.

Broadgreen, Nelson - 17c
Located in Nayland Road, Stoke, this building is a fine example of an old cob house.  It was built in 1855 and with subsequent restoration is now a major tourist attraction.  This house is also renowned for its beautiful rose gardens.

The Courthouse, Oamaru - 25c
The courthouse was designed in 1882 by Messrs Forrester and Lemon, Architects, in the Roman Corinthian style.  It was opened on Monday, 7 May 1883.  The interior was remodelled some 65 years later.

Government Buildings, Wellington - 30c
This massive 1877 wooden building was designed by W A Clayton New Zealand's  first Colonial Architect who, it is claimed, was 'the first to use wood successfully in the grand manner'.  The way in which wood has been used in the detail of the exterior to stimulate traditional stone architecture is worth noting.  The building is often spoken of as the largest wooden structure in the Southern Hemisphere.  An extensive restoration project of this building was completed in 1995.