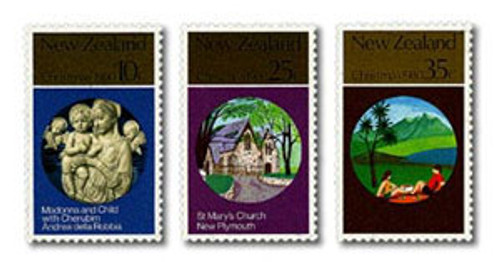 "Madonna and Child with Cherubim" by Andrea della Robbia (15th century) - 10c
The original of this painting is held in the Andrew Mellon Collection, National Gallery of Art, Washington DC, United States of America.

St Mary's Church, New Plymouth - 25c
An Anglican church, built in 1846, it is probably the oldest stone church still standing in New Zealand.  It was built five years after the foundation of the tiny New Plymouth settlement by the Devonshire yeomen who came to New Zealand to make a new home.  When first erected, it measured 50 feet by 30 feet but over the years a number of extensions have been added.

Picnic scene - 35c
This is a typical outing around Christmas time for many New Zealanders in the height of the New Zealand summer.