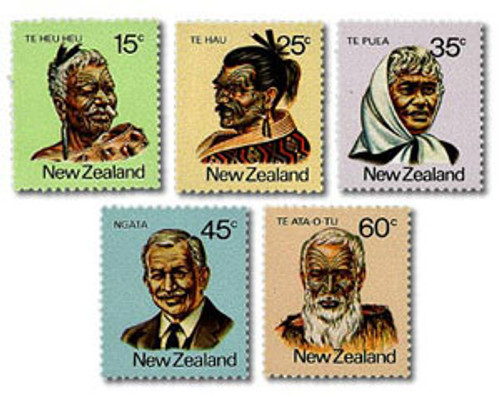 Te Heu Heu Tukino IV - 15c
A paramount chief of the Ngati Tuwharetoa tribe, he gave the three central North Island mountain peaks of Tongariro, Ngauruhoe and Ruapehu to the nation in 1887, the year before he died.

Te Hau-Takiri Wharepapa - 25c
One of the chiefs who sailed to England in 1862 to meet Queen Victoria and returned with an English wife.

Sir Apirana Ngata - 45c
Maori leader, politician, statesman and scholar, he represented the Eastern Maori electorate in the House of Representatives from 1905 to 1943.

Hakopa Te Ata-o-tu - 60c
A warrior of high rank, who was captured and became a slave, being liberated later when the tribes embraced Christianity.