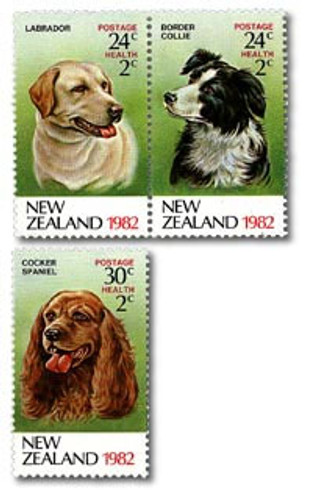 The 1982 Health Stamp Issue depicted three popular breeds of dogs - Labrador, Border Collie and Cocker Spaniel. The proceeds of the 'Health' value of health stamps were donated to the Children's Health Camps movement.

Two stamps in a se tenant format depicting - 24c + 2c x 2
Labrador:  bred both as a family pet and working dog, and is a popular gun dog.  It has a characteristic 'otter' tail - short and thick at the stump.

Border Collie:  The Border Collie is notable for its ability as a sheepdog.  It uses the force of its gaze as a means of controlling sheep.  The inclusion of the sheepdog is indicative of the important role performed by these dogs on New Zealand farms.

Cocker Spaniel - 30c + 2c
The Cocker Spaniel, although once used as a gun dog, is now a popular household pet and show dog.

Miniature Sheet - $1.68
Incorporating two examples of each of the three stamps from the issue.