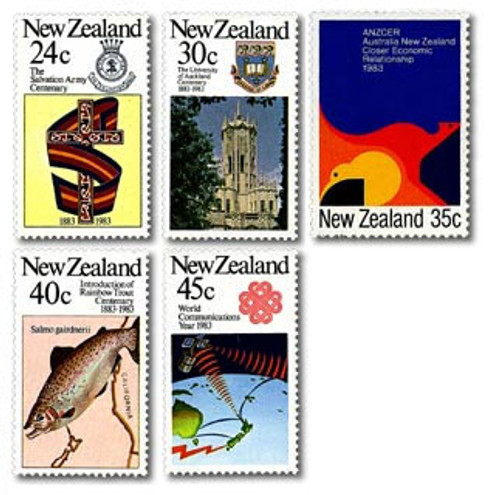 The centenary of the Salvation Army is recognised on the 24 cent stamp, which shows a logo designed specially for the occasion by Bro. Ivan Preston of the Wellington Corps. Salvationism was bought to New Zealand by Captain George Pollard and his Lieutenant, Edward Wright, who arrived in Dunedin on April 1, 1883. By the end of that year it had been established in over 25 centres from Auckland to Invercargill, and by the end of the decade, the Salvation Army was working in every town with a population of more than 1,500. This rapid growth occured in spite of strong opposition from the then Prime Minister, Richard John Seddon and from much of the public. The Otago Daily Times published an editorial on March 27, 1883, which read "Bringing the Salvationists to New Zealand will be another of the many mistakes of acclimatisation. It is the thistles, the sparrows, the rabbits all over again. The Army will prove to be a nuisance as troublesome as these pests and as ineradicable.

Nevertheless, the philosophy of "Soup, soap and Salvation" in that order, brought help to the poor, to prisoners and ex-prisoners, prostitutes, the homeless and alcoholics. During the early days many Army members were injured in riots and even imprisoned for their beliefs. In 1983 The Salvation Army maintained more than 100 Corps (church) centres and 50 social service and community programme centres. Their work helped alcoholics through the bridge programme and unemployed youths through a work skill development programme. The Salvation Army also had hostels for homeless people, full-care and day-care centres for children, court and prison visitors and homes for the elderly. Centenary celebrations were held all over the country, with three major events. A celebration was held in Dunedin to commemorate the first work of the Army in New Zealand and one in Auckland where salvationism began. An International Centenary Congress with 5,000 delegates from all over the world was held in Wellington.

The University of Auckland's old Arts building and Coat of Arms featured on the 30 cent stamp. Its centenary marked one hundred years since the Auckland University College was opened on May 21, 1883. At that time the college was affliiated to the University of New Zealand. Faculties of study were classics and english, mathematics, chemisty, physics, biology and geology. During the next 35 years, courses in music, mines, engineering, history, economics and architecture also became available. By the time the university became an independant institution in 1961 botany, geography, anthrology, psychology and town planning departments had also been established. In the past 20 years, Auckland University has been able to offer an extensive range of courses from nuclear physics to Asian languages and literature and has established a medical school. The University of Auckland Coat of Arms bears the motto "Ingenio et Labore" freely translated as "by natural ability and hard work". The three stars express the idea of learning pursued under the sky of the Southern Hemisphere. Beneath the three kiwis is a wavy line, emphasing that Auckland is on the sea coast.

The 35c stamp commemorated the signing of the  Closer Economic Relationship (CER) agreement between Australia and New Zealand. Both countries released a stamp simultaneously on 25 February 1983, to commemorate this agreement. CER initially provided for the establishment of free trade in goods, between both countries and was New Zealand's first comprehensive bi-lateral agreement. CER built upon the earlier New Zealand Australia Free Trade Agreement implemented in 1966.

The 40c stamp commemorated the rainbow trout (salmo california) and showed a rainbow trout spanning the ocean from California to New Zealand. The trout were introduced into Auckland in 1883, the same year that the brown trout were introduced from Europe. From ova that were raised successfully in ponds in the Auckland domain, the rainbow trout was eventually released throughout New Zealand and today is found in neary all rivers, lakes and streams. Ova and fry have been carried by horseback to isolated areas, and fingerlings have been dropped into remote lakes from aircraft. The rainbow variety is the most sought after trout in the world because of its renowned fighting qualities.

Trout fishing attracts tourists to Lake Taupo and Lake Tarawera. Most rainbow trout in New Zealand live in lakes and run up tributary streams to spawn from July until October. The fish are steel-green along the back, turning silver on the belly with black or brown spots along the back. Along the lateral line, they are pink, a colouring which inflames during spawning.