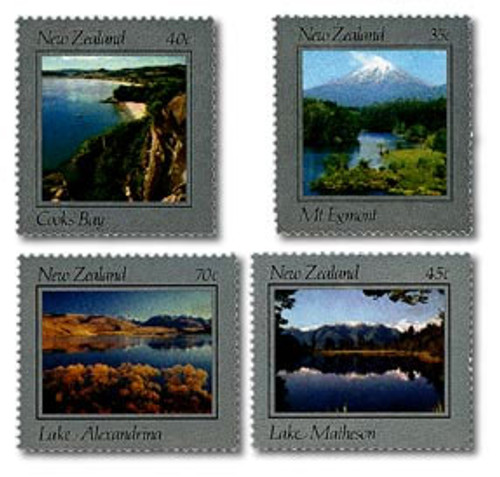 Beautiful New Zealand, from its coastline to its high country, from bush-fringed bays to majestic peaks, is a land of great and diverse beauty and this was amply demonstrated by the four scenic stamps in this issue.

Mount Egmont featured on the 35c stamp, and is located on the West Coast of the North Island. The Māori name for the mountain is Taranaki (meaning shining mountain peak) and it was renamed Mount Egmont, after the Earl of Egmont by explorer James Cook. The name Taranaki was given equal and official status in 1986. The The area around the mountain is known as the Egmont National Park and is a popular region for climbers trampers and skiers. There are several ski grounds. One skifield is on Fantham Peak, a subsidiary cone and prominent feature of Mount Taranaki / Egmont. Because of the steepness (up to 50 degrees) and unreliable weather, the mountain has taken a regular toll of lives. The lake featured on this stamp is Lake Mangamahoe. The lake was formed in one of the numerous streams flowing from the north-eastern slopes of the mountain and is enclosed in a wooded reserve and is a wildlife refuge.

Cooks Bay featured on the 40c stamp, and is a popular resort situated on the Coromandel Peninsula on the East Coast of the North Island. Cooks Beach is sheltered on its western side by the high bluff, Shakespeare Cliff and to the east by the larger headland, Cooks Bluff. The area has many historic associations. Captain Cook arrived in the Bay in November 1769 and at once set up his shore station at Cooks Beach. On November 9, he observed the transit of Mercury to determine the longtitude of the Bay and on the 15th of November hoisted the British flag and claimed sovereignty for Great Britain in the name of George III.

Lake Matheson featured on the 45c stamp was formed by the retreat of Fox Glacier some 14,000 years ago which left behind a massive slab of "dead" ice insulated by a deep layer of moraine gravel.  In time, this separated from the mainstream of the glacier, the ice melted and the lake was created. In calm conditions Lake Matheson gives perfect reflections of Mount Cook / Aoraki, the highest peak in New Zealand. Surrounded by native bush - rimu, kahikatea and koromiko - the area is popular for day trips and scenic walks from the Fox Glacier, six kilometres away. Fox Glacier and Lake Matheson are both within the boundaries of the Westland National Park, which extends from sea level to heights of more that 3,000m on the western side of the Southern Alps. This range divides most of the South Island.

Lake Alexandrina is a wild life refuge, an exceptional trout fishing resort, and home for the South Island Acclimatisation Society. It was named in honour of Princess Alexandrina (1844-1925) daughter of Christian IX of Denmark. Princess Alexandrina later married Edward, Prince of Wales. Māori have many interesting legends to account for the origin of the glacial lakes of Tekapo and Lake Alexandrina. One account tells the story of Rāikaihautū, the great digger of lakes, who arrived in the Uruao canoe. He and his tribe explored the interior of the South Island and Rākaihautū dug several lakes with his kō or wooden spade.