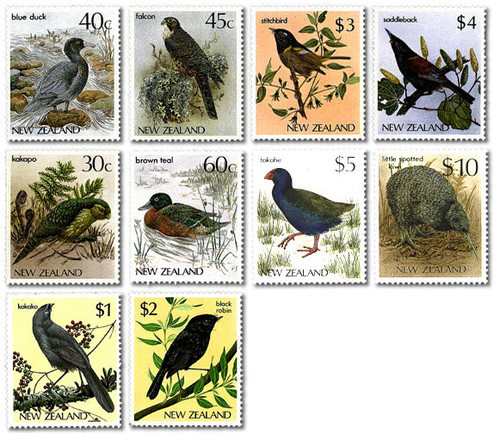 New Zealand has the highest number of endangered birds of any single country in the world.

The native birds featured on this series of stamps are among the rarest and most beautiful in the world.  While imported predators and destruction of their native habitats threaten their extinction, concerned New Zealanders are acting to ensure the survival of these elegant and engaging bush-residents.

Increasing difficult to find and view in the wild, the unique beauty of New Zealand's native birds have been captured on these stamps.

This series of stamps was issued progressively over a four year period 1985 - 89.

Kakapo: Issued 1 May 1986 - 30c
Though it resembles an owl, the beautifully patterned kakapo (Strigops habroptilus) is actually a species of parrot.  Practically flightless, it is a ground-dwelling bird found in mossy beech forests, and alpine meadows and scrub.  The kakapo is nocturnal and vegetarian, feeding on a variety of plants such as the leaves of tussock, rushes, fern, berries, leaves, and roots, and is famous for the large 'dust bowls' which the males make as part of their courtship display.  Once widespread throughout New Zealand, the kakapo suffered heavy predation and was feared to be close to extinction until a small population was found on Stewart Island in 1977.  Now found mainly in small and isolated areas of Fiordland and central Stewart Island, the kakapo is thought also to exist in parts of the North Island.  The kakapo is still extremely rare.

Blue Duck: Issued 2 February 1987 - 40c
The blue duck (Hymenolaimas malacorhynchos) is unique as it has no close relations anywhere in the duck world.  Blue ducks, or whio in Maori, are beginning to show a very discontinuous distribution - a classic symptom of a species in decline.  Presently there is much effort being directed towards identifying the rivers on which the blue duck occur and how many are present, however, it is known that these birds are located in the upper river valleys of the central North Island and the western flank of the Southern Alps and Fiordland in the South Island.

Falcon: Issued 1 May 1986 - 45c
The New Zealand falcon or bush hawk (Falco novaeseelandiae) is one of two species of true birds of prey native to New Zealand.  Becoming increasingly rare in the North Island, it is still seen only in isolated back-country valleys and in the South Island high country.  It is a versatile hunter and fast flier, reaching speeds of up to two hundred kilometres per hour.  Its prey consists mainly of smaller birds, mice, rabbits and an occasional stoat.  The falcon was once a target for farmers - perhaps because of the bird's fierce defence of its breeding territory, which will lead it to attack even human trespassers.  Today, the New Zealand falcon is no longer hunted, and is protected by law.

Brown Teal: Issued 2 February 1987 - 60c
The brown teal (Anas aucklandica) has the unenviable distinction of being the rarest of New Zealand's waterfowl.  In the South Island, brown teal, or pateke in Maori, are nearing extinction, whereas several populations remain in the North Island.  The principal concentration, of about 900 birds, is on Great Barrier Island.  Northland is the last mainland stronghold, but there the decline is steady.  The total population throughout New Zealand is perhaps fewer than 1500 birds.

Kokako: Issued 24 April 1985 - $1.00
The kokako (Callaeas cinerea) illustrated is a North Island variety and is also known as the blue wattled crow, referring to the two blue bags which hang from the head of the bird and steel-grey plumage.  The kokako grows to about 38 cm long.  With two legs and a disproportionately long tail, it is not a good flier but tends to hop along branches and trunks and glide from one tree to another or move across the forest floor with a clumsy bounding gait.  Living in dense pockets of kauri trees and rain forest, the kokako is usually well away from the sight of man feeding on young leaves, flowers and berries.  The North Island kokako is now quite rare - barely surviving its orange-wattled South Island cousins, considered today to be extinct.

Black Robin: Issued 24 April 1985 - $2.00
One of the world's rarest birds, the Chatham Islands black robin (Petroica traversi), is a forest and scrub dweller of about 16cm in length.  This species is one of the smallest in numbers and most endangered in the world and during the summer of 1976/77 the New Zealand Wildlife Service transferred the entire population from Little Mangere Island to nearby Mangere Island (in the Chatham Islands group) after planting 150,000 trees in an effort to rejuvenate the habitat.  In 1980/81, the first clutches of the remaining birds were transferred to nearby nests of Chatham Island warblers, where three chicks were raised to fledging by the warblers before being returned to the robins for rearing.

Stitchbird: Isuued 23 April 1986 - $3.00
The stitchbird (Notiomystis cincta), also known as 'hihi', is easily identified by their erractic movements and distinctive call.  They are a forest dwelling species feeding mainly on nectar, fruits and insects.  Adults feed in the lower forest strata whereas juveniles spend much time on or near the ground.  Now confined to Little Barrier Island, Hauraki Gulf and Hen Island where it was introduced in 1980, the stitchbird was previously distributed throughout much of the North Island and on Great Barrier Island.  The stitchbird was apparently uncommon in the northern third of the North Island, even in early European times and became extinct in the North Island and on Great Barrier before 1900.

Saddleback: Isuued 23 April 1986 - $4.00
The saddleback (Philesturnus carunculatus) recognised by its striking 'saddle' of chestnut-coloured plumage, another forest bird living in middle and lower layers of the forest and feeding on insects, fruit and nectar.  Confined until recently on Hen Island in the Hauraki Gulf and three islets off the south-western tip of Stewart Island, the saddleback has now been re-established on a number of North Island islands, Maud Island in the Marlborough Sounds and islands around Stewart Island.  The saddleback was, prior to 1900, distributed through much of New Zealand's forest areas and on many offshore islands.

Takahe:  Issued 20 April 1988 - $5.00
The takahe (Porphyrio (Notornis) mantelli), a member of the "rail" family of birds, has had a protracted and dramatic struggle for survival.  In pre-European times it was distributed throughout the greater part of New Zealand but, in recent centuries, it declined to the extent where, from 1847 to 1898, only five birds were recorded.  For the next 50 years there were no sightings whatsoever, until Dr G B Orbell located a small colony of about 12 pairs in Fiordland, in 1948.  In fact there were, as it later became known, about 500 birds in existence at that time.  The takahe's history has not been encouraging with its numbers slowly declining.  Research suggests that the dwindling takahe numbers are related to the modification of vegetation by deer.  Both animals select tussock species with the highest phosphorus content.

Little Spotted Kiwi:  Issued 19 April 1989 - $10.00
The little spotted kiwi (Apteryx owenii) is so rare, it has been seen by few New Zealanders this century.  Last century, it was studied in detail by naturalists and unfortunately hunted by both European and Maori for food.  It's unusual feathers were coveted for cloaks by the Maori and for fashion trimmings by the European.  One hunter alone apparently killed more than 2200 kiwis before 1871 - and most of them were little spotted kiwis.  Today, the largest colony is found on Kapiti Island.

Post'X  Miniature Sheet - $10.00
A special miniature sheet was produced for the Post'X 1995 Postal History Exhibition held in the Downtown Convention Centre, Auckland, New Zealand in February 1995.  The theme of the exhibition was 'kiwis'.  The exhibition's objective was to raise young people's awareness of stamp collecting.  New Zealand Post produced a sheet which included the $10 definitive little spotted kiwi stamp and a 'specimen' reproduction of the 1935 pictorial kiwi stamp.