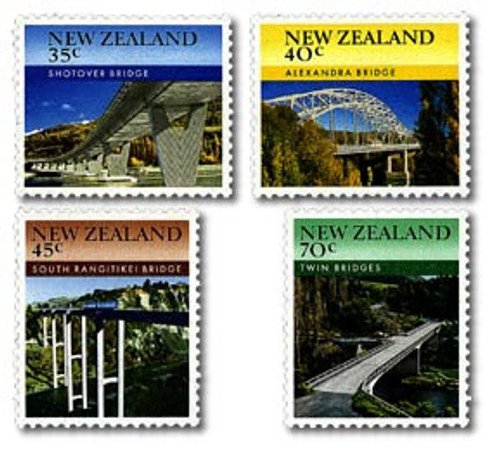 New Zealand is world-renowned for its spectacular scenery. Soaring mountain peaks, deep majestic fiords, vast peaceful tracts of native bush, untouched by man - all combine to give New Zealand its inimitable beauty and character. The road and rail bridges which blend into this landscape are the subject of this issue.

Over the years man has adapted natural bridge forms, crossed higher and wider gaps and used a large variety of materials.  From the wood and stone used by early man, bridge designs have progressed through the use of iron and steel to the reinforced and pre-stressed concrete of today.  Aluminium too is now taking its place in modern bridge design.

The construction of roads and bridges in New Zealand began in the 1840s, soon after the first settlers arrived. The first section of railway line opened in 1863, and by 1880 most of the main lines of communication were complete. Many bridges were built in a huge programme of public works between 1870 and 1880 and there was  another massive building programme undertaken in the 1960s when many earlier bridges were had to be strengthened or replaced.

The 1985 Scenic Stamp Issue featured four New Zealand bridges, two from the South Island - the road bridge across Shotover River and at the bridge across the Clutha River at Alexandra. The other two stamps feature bridges from the North Island - the South Rangitikei rail bridge and Twin Bridges located at the confluence of the Mangakahia and Awarua rivers in Whangarei County in Northland.