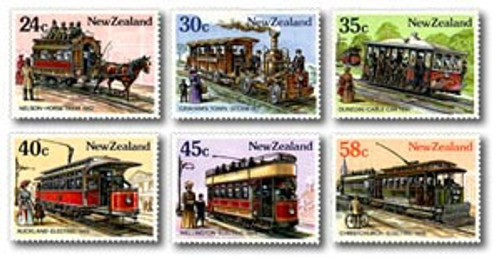 Trams and cable cars initially horse-drawn then steam-powered and later electric-powered were a vital means of public transport in New Zealand cities for over 100 years. New Zealand town dwellers, having had no option but to rely on their own feet until the latter half of the 19th century reacted excitedly to the first signs of public transport. Where wheeled transport was available wagonettes, drays, and particularly, the high and flimsy horse-buses, made local travel an adventure.

Steel rails began to appear in the streets, first with snorting, sweating horses and later hissing steam engines. Passenger transport became the life-blood of each city centre. Now the workforce could settle in outer suburbs and still be within reach of city employment. Hills that had been daunting prospects on foot were tamed by cable cars that climbed the slopes with invisible power. Electricity arrived, and its use on the streets preceded its use in the home, greatly impressing the populace in the days when housewives still cooked over coal ranges and lighting was by gas or candles.

Tram-cars reigned supreme in New Zealand streets for longer than any other public vehicle. There were weather-beaten drivers holding tightly to their reins, grippers or control handles. There were the many different conductors collecting fares and during wartime women took over these roles.

All served New Zealand and New Zealanders over the years, delivering people to their homes, businesses and recreational activities.  The public in turn became attached to these structures of wood and steel that gave everyone the freedom of the cities before the days of the all-conquering automobile.