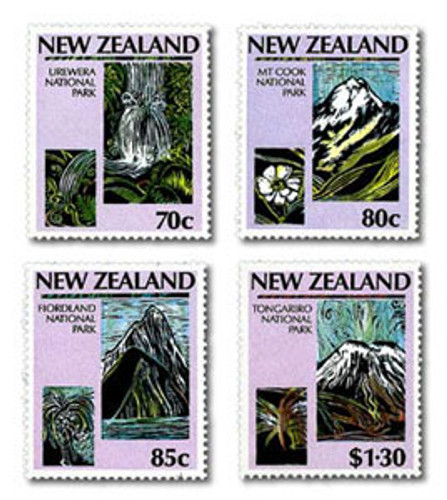 The 1987 Scenic Issue commemorated the centennial of the National Parks movement in New Zealand and depicted four quite different parks:

Tongariro and Urewera in the North Island and Mt Cook and Fiordland in the South Island.

In 1887, Te Heuheu Tukino IV, paramount chief of the Ngati Tuwharetoa with the consent of many other chiefs, gifted to the people of New Zealand the tribally-owned land within a radius of one mile of the three volcanic peaks of Tongariro, Ngauruhoe and Ruapehu. The land was given on the understanding that it would be kept sacred under the protection of Queen Victoria and on the condition that it would be preserved as a national park.  Originally 2630 hectares in area, today the park has grown to almost 80,000 hectares.

Tongariro remained the only national park until the turn of the century when the Egmont National Park was established in October 1900.

The administering body, the National Parks and Reserves Authority, operates under the 1980 National Parks Act which spells out the concept of protection coupled with the right of public entry - "to preserve in perpetuity as national parks, for their intrinsic worth and for the benefit, use and enjoyment of the public, areas of New Zealand that contain scenery of such distinctive quality, ecological systems, or natural features so beautiful, unique or scientifically important that their preservation is in the national interest".

Miniature Sheet - $1.70_b
The 1987 scenic miniature sheet was also produced with a Capex'86 overprint to mark New Zealand Post's attendance at the Capex'86 World Philatelic Exhibition in Toronto, Canada.