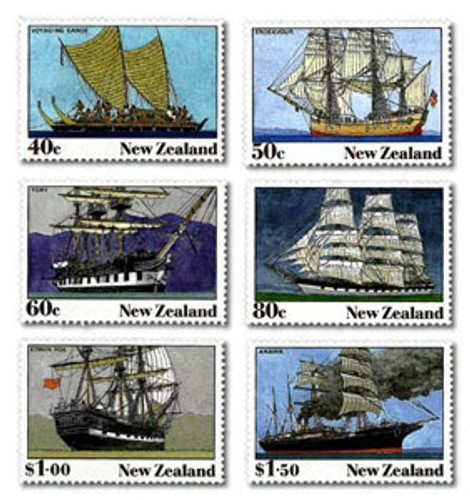 This issue titled 1990 'The Ships' was another in the 'Heritage' stamp series leading up to the 1990 150th anniversary celebrations in New Zealand.

The stamps were a salute to the vessels that brought Polynesian voyagers, settlers and the other immigrants that determined our ancestry.  From voyaging canoes to steamships, these craft carried the first New Zealanders through unchartered waters to an unseen landfall across the world.

The Maori arrival shrouded by time, is still the subject of conjecture and investigation as no written language existed. The stories of age-old voyages and landfalls were handed down orally from generation to generation and such oral tradition is always open to interpretation and challenge.  However, the story of European discovery goes back only three hundred years and is totally documented. Many European New Zealanders look back to forebears who braved passage on sailing ships that came half way around the world.

Using only basic celestial navigation, these ships were among the craft that transformed our island nation.  From the frail vessels of Abel Tasman to the sturdy ships of Cook's age, on to the swift and beautiful clippers and finally to steam, which spelled the end of sail. Each craft shown played an important and historic part in New Zealand's discovery and settlement.

Product listing for 1990 Heritage The Ships