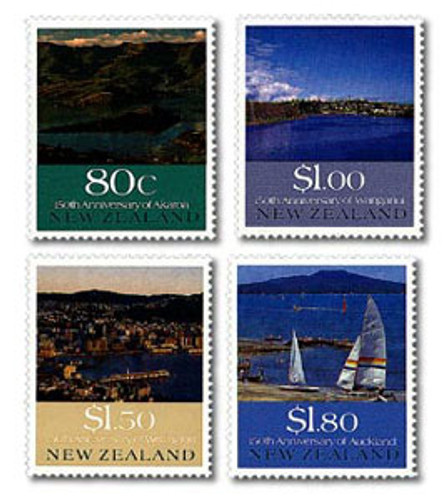 The 150th celebrations of three cities and a famous small town coincided with the sesquicentennial year of New Zealand. The four subjects of these stamps could hardly offer greater contrast in terms of size and life styles.

At one end of the scale is Auckland, easily New Zealand's largest population centre.  One in three New Zealanders lives in the Auckland province, the northern third of the North Island.

Akaroa, at the other extreme, is a tiny South Island settlement with a permanent population of fewer than 1,000.  It nestles on the eastern shore of Akaroa Harbour on Banks Peninsula.

In between Auckland and Akaroa, in location, population and way of life, are Wanganui and Wellington, both in the southern North Island.  Wanganui is a country centre, serving a stable rural area.  Wellington is distinctive as the nation's capital and clings to the steep hills ringing a magnificent harbour.

A fact of history is what brings Auckland, Akaroa, Wanganui and Wellington together in this issue.  All four date their European founding to 1840, the year of the Treaty of Waitangi and the year that systematic immigration began.  They were among the first locations settled by Europeans and hence New Zealand Post issued the 1990 Scenic Issue with these places in mind.

By late 1840, officials, traders and workmen had flocked to the site of Auckland to help build the town, and in 1842 the first immigrant ships from Britain arrived. Many ethnic groups settled in Auckland.  English, Danes, Yugoslavs, Dutch and, in a second migratory wave, the Polynesians from the islands of the Pacific.  Each added their own cultures.  Today it could be regarded as the most cosmopolitan city in New Zealand boasting the country's largest city and home to over one quarter of the entire country's population.

This sheet was issued in support of the 'New Zealand 1990' World Stamp Exhibition and incorporated the $1.80 'Auckland' stamp.

In the background of the sheet design is Rangitoto Island the most noble of the series of extinct volcanoes surrounding Auckland.  It stands on guard over the harbour entrance.  Auckland is essentially an aquatic playground with everything from wild ocean surfing beaches to tranquil inner harbour coves.  The hundreds of yachts constantly on the water give the Queen City its name - City of Sails.