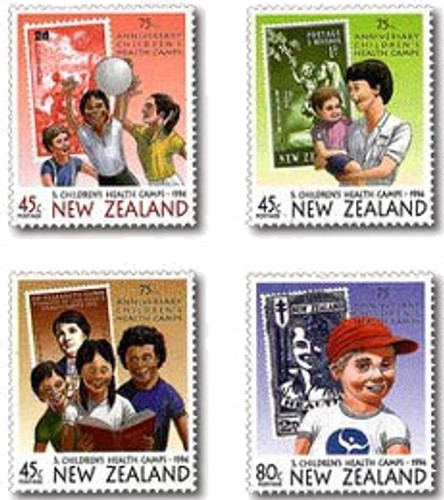 This special anniversary issue celebrated past, present and future of children's health.

As a reflection of the new pressures and needs of families in recent years, the role of Health Camps has evolved to deal with emotional and behavioural - as well as health - problems. Much of this is achieved through success-oriented activities designed to restore self-confidence and encourage independence in children.

The proceeds of the 'Health' value of health stamps were donated to the Children's Health Camps movement.

As a means of further strengthening and integrating the vital family unit, Children's Health Camps now encourage parents or guardians to 'live in' for part of the period their children are at the camps. During this time they focus on how to respond to their children's emotional and physical needs.

Like the camps themselves, Health stamps have become a familiar part of our culture. In fact for 65 of the 75 years, New Zealand Post issued special stamps to raise both awareness - and funds - for Children's Health Camps in New Zealand. To mark this 75th anniversary we produced a special four stamp issue which fused Health stamps of the past with contemporary images.

This issue also included two first day covers and a miniature sheet. The miniature sheet shows girls washing their hair in basins outdoors at the Turakina Health Camp in the early 1920s.