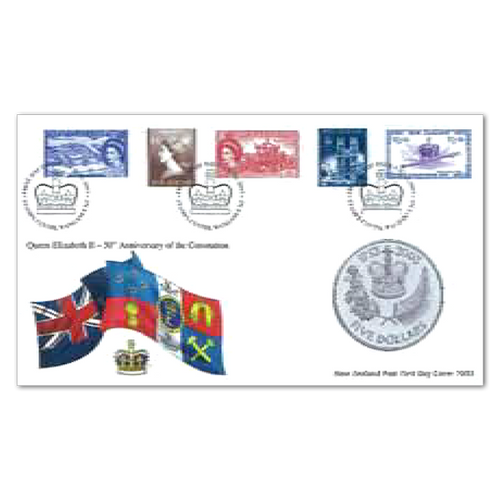 To share in the celebrations of the Queen's 50th anniversary, we issued this numismatic cover that featured a stunning sterling silver coin.

New Zealand's commemorative silver frosted proof $5 depicted an image of the St Edwards crown between a stylised sprig of roses, thistles, shamrocks and the New Zealand fern frond on its reverse. The combination of the fern, rose, thistle and shamrock represented the recognised offical floral emblems of New Zealand, the United Kingdom of Great Britain and Northern Ireland. These emblems were among those embroidered on the Queen’s coronation gown, which was also worn when she opened the New Zealand Parliament on 12 January 1954. The St Edward’s crown was used in the actual coronation service in 1953.

The coin in this philatelic numismatic cover (PNC) was made of 0.925 sterling solver and had been selectively plated with 22-carat gold to highlight Queen Elizabeth II's portrait on its obverse side.

This special product was strictly limited to a quantity of just 100 covers.