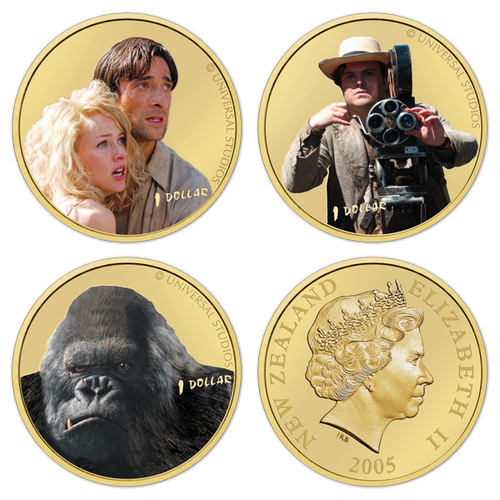 This was the first time New Zealand Post ever used photo colour technology on these three brilliant uncirculated coins.

You could glance through the portholes of The Venture for memories that would last a lifetime. These three brilliant uncirculated coins featured the brave adventurers alongside the imposing image of Kong.

When they arrive at the mysterious Skull Island, the explorers are faced with unimaginable dangers when they discover that Kong is real. The ferocious 25-foot gorilla shows his only weakness when he falls for the golden-haired Ann, and a dramatic adventure follows as they must fight to escape with their lives.

When ambitious film-maker Carl Denham hears about an island untouched by time, a place thought only to exist in myth, he is captivated by the story and glimpses his chance at fame. Abandoning all caution, he embarks on a dramatic film project that is doomed to end in tragedy.

In his search for a star, Dunham discovers Ann Darrow, a beautiful but out-of-work actress who is struggling to survive in Depression-era New York. Playwright Jack Driscoll completes the trio, oblivious to the role he will ultimately play in this wild adventure and the unlikely hero he will become.

The three coins were beautifully finished with colour pad print using the latest technology production as did the producers of the movie with its graphics. These were New Zealand's first ever photo colour coins and were mounted in eye catching unique packaging that was designed by Saatchi and Saatchi.

The Hobbit: The Desolation of Smaug Brilliant Uncirculated Coin Set