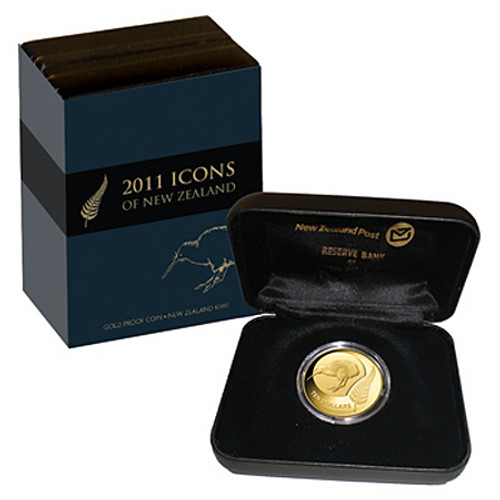 Struck from 24-carat gold, this is the premier coin of the 2011 collection.

In this third and final issue we bring the series to a resounding conclusion by paying tribute to the most Kiwi of icons, the silver fern. Across all three products in this issue, the fern is given more prominence than the icons in our previous releases. We have also reversed the polishing effects on the 2011 gold and silver proof coins so the mirrored kiwi now shines through on a frosted inner circle, while the denomination and silver fern are frosted and raised with beautiful effect. Struck from 24-carat gold, this New Zealand currency proof coin will be highly sought after. The silver fern and kiwi shine through on this precious collectable, which is beautifully displayed in a leatherette presentation case and accompanied by an individually numbered certificate of authenticity. To commemorate the third and final release in the series, we have reduced the mintage limit of this coin to an all-time low of just 995!