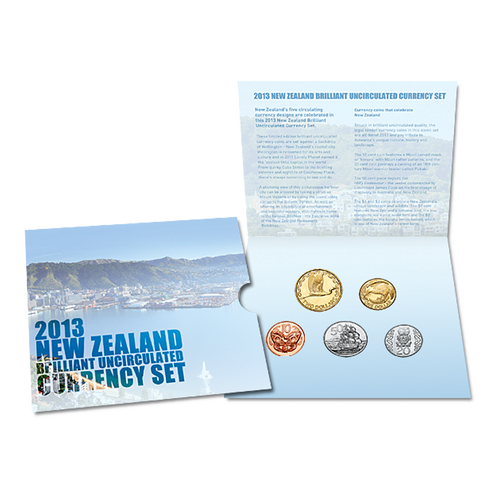 With all of the coins in this brilliant uncirculated currency set dated 2013, it makes a great gift for special occasions occurring in 2013, or the perfect memento of a visit to Aotearoa.

This year the brilliant uncirculated currency set has a new look and will no longer include the annual coin issued in the same year.

The currency coins in this set are a reflection of New Zealand’s culture, heritage and landscape – of which Wellington is an integral part.

The 10 cent coin features a Māori carved mask or ‘koruru’ with Māori rafter patterns. Koruru are usually mounted on the gables of wharenui (meeting houses) and are referred to as ‘the guardians of the house’.

The Māori carving shown on the 20 cent coin is a reproduction of a carving of an 18th century Māori warrior leader called Pukaki, who was a rangatira (chief) of the Ngāti Whakaue iwi of Te Arawa in the Rotorua district.

The 50 cent coin depicts the HMS Endeavour – the vessel commanded by Lieutenant James Cook on his first voyage of discovery to Australia and New Zealand. Mount Taranaki (Egmont) is shown in the distance.

New Zealand’s national bird and beloved icon, the kiwi, appears on the $1 coin. This small, flightless bird has been in New Zealand for more than 60 million years, and is largely nocturnal.

The $2 coin features the kotuku (white heron). The kotuku is one of New Zealand’s rarest birds and is held in particularly high regard in Māori mythology.