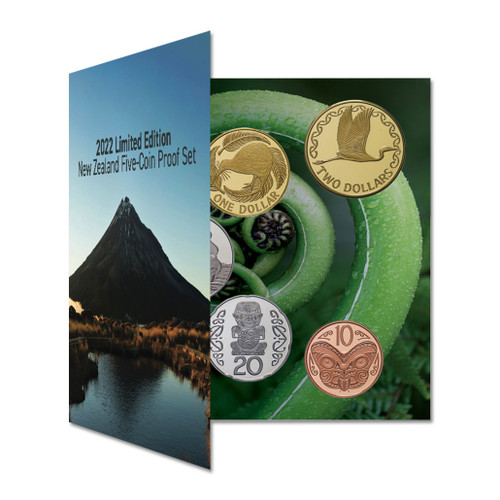 This limited-edition set features New Zealand’s iconic currency coins in magnificent proof quality. Each coin is specially dated 2022, and there are only 250 available worldwide.

New Zealand’s Māori culture is a vital part of our national identity. The 10-cent coin features a Māori carved mask, known as a ‘koruru’, with rafter patterns. Traditionally, a koruru is carved into the gables of the meeting house, and is seen as the ‘guardian of the house’.

The 20-cent coin portrays an 18th century carving of Māori leader, Pukaki. After his passing, he was depicted in a carving that featured as part of a gateway to strengthen Ohinemutu in preparation for attack. The carving today can be viewed in the entrance to the Rotorua District Council building.

The 50-cent coin features the HMS Endeavour, the ship Captain Cook arrived on when he became the first Briton to reach New Zealand in October 1769.