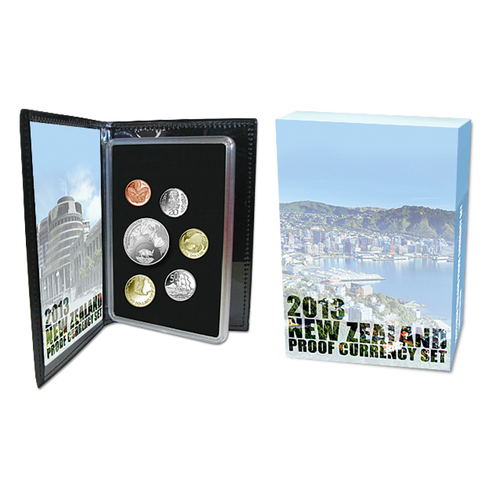 Included in the proof currency set is the 2013 New Zealand annual coin in brilliant uncirculated quality. This unique $5 coin features the New Zealand short-tailed bat (Mystacina tuberculata). This ancient species is unique to New Zealand, and is listed by the Department of Conservation as a ‘species of highest conservation priority’.

The 10 cent coin features a Māori carved mask or ‘koruru’ with Māori rafter patterns. Koruru are usually mounted on the gables of wharenui (meeting houses) and are referred to as ‘the guardians of the house’.

The Māori carving shown on the 20 cent coin is a reproduction of a carving of an 18th century Māori warrior leader called Pukaki, who was a rangatira (chief) of the Ngāti Whakaue iwi of Te Arawa in the Rotorua district.

The 50 cent coin depicts the HMS Endeavour – the vessel commanded by Lieutenant James Cook on his first voyage of discovery to Australia and New Zealand. Mount Taranaki (Egmont) is shown in the distance.

New Zealand’s national bird and beloved icon, the kiwi, appears on the $1 coin. This small, flightless bird has been in New Zealand for more than 60 million years, and is largely nocturnal.

The $2 coin features the kotuku (white heron). The kotuku is one of New Zealand’s rarest birds and is held in particularly high regard in Māori mythology.

Each of the coins in this iconic set is New Zealand legal tender and the mintage is limited to 1,500 worldwide. At a price of just $119.90, make sure you don’t miss out on this exciting new addition to New Zealand Post’s coin programme.