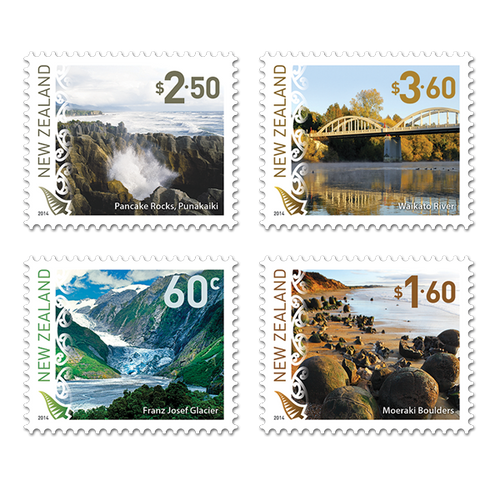 One of the main tourist attractions of the West Coast, this stunning glacier offers a rare opportunity for people to experience a dynamic glacial environment. Between 1985 and 2006, the glacier was generally advancing and thickening before entering a stage of massive retreat in 2008. The face of this glacier is just 300 metres above sea level and it is one of the few to be so close to the coastline.

Around 60 million years ago, the Moeraki Boulders started forming on the ocean floor into the unusual spherical shapes we know today. The largest of these boulders is more than two metres in diameter, while the smallest is barely larger than a football. Māori legend states that they are eel baskets, fishing nets and calabashes (also known as ‘opo gourds’) that washed ashore from the large waka Āraiteuru and turned to stone.

Formed 30 million years ago from minute fragments of plant and marine creatures, these limestone rocks were raised up by seismic action and are named for their distinctive visible layers. Wind, rain and seawater have gradually eroded and sculpted the rocks into the unique formations we see today. During high tides the sea bursts through the gaps in the rocks, creating vertical ‘blowholes’.

The Waikato River is New Zealand’s longest river at 425 kilometres, starting in Mount Ruapehu and emptying into Lake Taupo. The word ‘Waikato’ in Māori translates to ‘flowing water’ and the river is a source of mana (pride) for many local tribes. As well as having spiritual significance, the river has many practical uses relating to hydro-electricity. The Waikato region and Waikato Plains are named after the river.