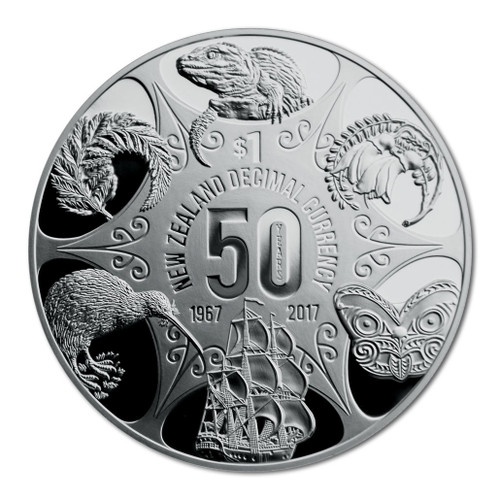 Take a closer look at some of the key elements of James Berry designs that decorate the surface of this spectacular 2oz decimal currency coin. The relief and polishing effects used give each icon depth and detail best viewed up close.

On 10 July 1967, New Zealand abandoned pounds, shillings and pence in favour of decimal currency. The new system was quickly adopted by New Zealand and was generally easier to understand than the complex imperial system. Of course, this new currency meant that there also needed to be new coins. The designs that were finally settled on had been designed by New Zealander James Berry. His designs of a silver fern, kōwhai, tuatara, Māori carved head or kōruru, kiwi and HMS Endeavour were chosen from a wide selection of submissions, and his 10-cent and 50-cent coin designs remain in use today.

This 2oz commemorative coin incorporates all of the iconic New Zealand symbols that were used in James Berry’s original designs. Each of the key elements are dispersed around the edge of the coin and encompassed by delicate koru designs.