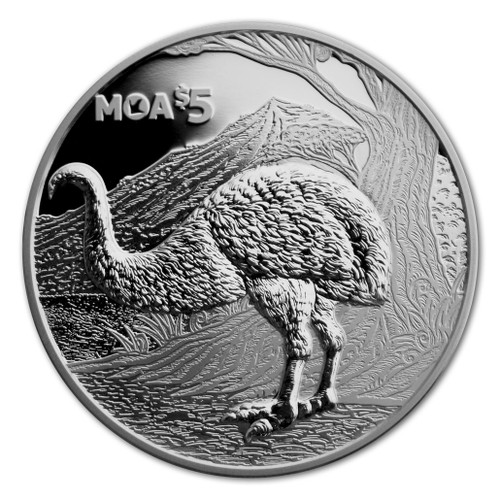 Moa are classified as part of the ratite group of birds, along with the emu, ostrich and kiwi. As they evolved in isolation from the rest of the world, and essentially without predators, the name of the living ratite to which they were more closely related has long been debated. For a long time it was thought to be the kiwi, but DNA testing has shown that the moa were most closely related to the small tinamous of South America - a surprising result indeed.

These giant herbivores were prevalent across New Zealand’s mainland as well as on offshore islands such Great Barrier and Stewart. On coastal dunes, in swamp lands and dense forests and all the way up to sub-alpine zones around 2,000 metres above sea level, moa browsed on a wide variety of foliage including flowers, trees and berries.

This 1oz silver proof coin minted from 0.999 silver has a stylised image of a moa in one of its more common habitats. It’s thought that multiple species of moa would have shared similar regions and browsing areas. Here the moa is depicted in a southern landscape; snow-capped peaks in the background can be seen as it emerges from dense native bush.

An etching-like technique was used by talented artist Dave Burke to create this unique and highly detailed scene.