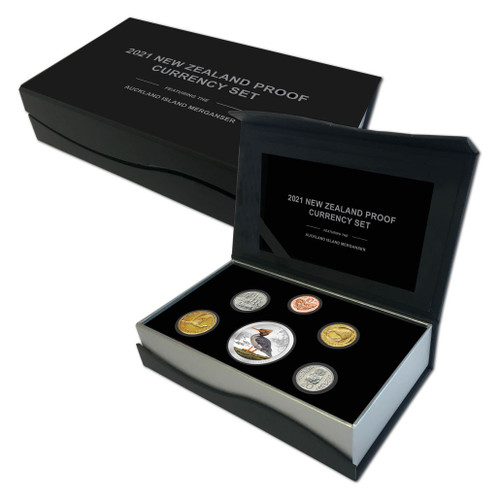 Alongside a 1oz silver proof coin, this set features proof versions of New Zealand’s circulating currency coins. Each coin is specially dated 2021. Collectively the coins feature many well-known New Zealand symbols such as the Māori carved mask, known as a ‘kōruru’ on the 10-cent coin, and the HMS Endeavour, the ship of Captain James Cook, on the 50-cent coin.

As well as the proof versions of New Zealand’s circulating currency coins, the set includes a 1oz version of the 2021 New Zealand Annual Coin: Auckland Island Merganser. Mergansers are fish-eating waterfowl. The last sighting of an Auckland Island merganser was in 1902, and by 1910 the species had been declared extinct. Although it’s not the only species that has been lost, the rich biodiversity that still exists on these islands has earned them a reputation as the Galapagos of the Southern Ocean. They are essential breeding grounds for many seabirds and a stronghold for species like the yellow-eyed penguin. The islands are also home to the largest number of subantarctic invertebrates of all New Zealand’s subantarctic islands, including an endemic genus and species of wētā Dendroplectron aucklandensis.