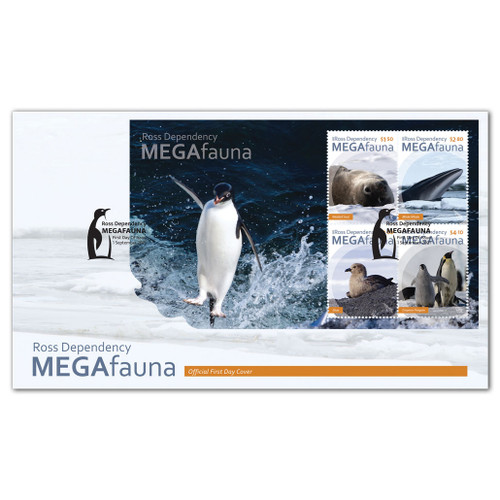 Established in 2017, the Ross Sea region Marine Protected Area (Ross MPA) protects more than 1.5 million square kilometres of the Southern Ocean. Supported by New Zealand government funding and with a wide range of research partnerships and international collaborators, the Ross Research and Monitoring Programme provides the opportunity to understand some of the most remote, inhospitable, and least understood environments on the planet. Their research looks at all aspects of the Ross MPA, from the phytoplankton and krill at the base of the food web to apex predators like seals and penguins, as well as the health of the ocean and sea floor ecosystems.

This stamp issue highlights some of the fascinating megafauna from this area with photos by Luke Keehan. Luke captured these images while assisting researchers conducting field work with emperor penguins and Weddell seals.

Single stamps in this issue are:

$1.50 Weddell Seal - On the southern side of the Erebus Glacier tongue, backed up against the edge of Ross Island, is a Weddell seal breeding colony called Hutton Cliffs. This pup was photographed sun-bathing near its mother while a research team was doing work at the site. At about 30 days old this pup still has another two to three weeks of time with mum before weaning.

$2.80 Antarctic Minke Whale - During February and March, as the sea ice breaks out close to McMurdo and Scott Base, minke whales and orcas can be seen coming close to the bases. This minke was one of a small group spotted in the melt pools directly in front of Scott Base. They were using the small gaps in the sea ice as breathing holes while hunting krill under the ice.

$3.60 Skua - Not far from Shackleton’s Hut at Cape Royds is a small Adélie penguin colony, and anywhere a penguin colony can be found, skua will not be far away. This south polar skua was photographed on the edge of the penguin colony in early December. As a hunter and scavenger, the skua will feed on fish as well as penguin eggs and chicks near breeding colonies.

$4.10 Emperor Penguin - Tucked into the edge of the Ross Ice shelf off the point of Cape Crozier at the eastern edge of Ross Island is the Cape Crozier emperor penguin colony. Photographed in late November, this emperor chick will start to moult and loose its juvenile plumage soon, and by the end of December will make its way out to sea for the first time.

Take a look at our other collectables that are still on sale. Click here.

2021 The Lord of the Rings: The Fellowship of the Ring 20th Anniversary Set of Miniature Sheet First Day Covers