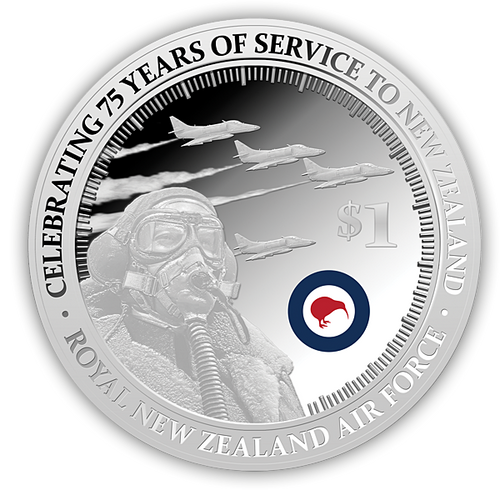 New Zealand Post is proud to present the 75 Years of the Royal New Zealand Air Force (RNZAF) Coin, the only New Zealand legal tender coin that has been officially authorised by the RNZAF to commemorate 75 years of military air operations in New Zealand.

This limited edition 1oz, 0.999 pure silver proof coin combines a number of graphic elements that are of great significance to the RNZAF in celebrating its 75th anniversary.

The RNZAF roundel is brilliantly displayed on the coin, raised in full colour. Roundels were created shortly before World War I as a system to identify aircraft from the ground. In 1970 the RNZAF adapted the RAF roundel that it had previously been using, to include a red kiwi instead of a red circle. The roundel remained unchanged until 2010 when the kiwi motif was streamlined to become the kiwi that appears in the roundel today.

The coin depicts highly distinctive Skyhawks rendered in three dimensional relief with a frosted effect that contrasts beautifully with the polished background. The Skyhawks are flying in a ‘missing man’ formation - an aerial salute used to represent loss that is often performed as part of an aircraft flypast at funerals and memorial events. Its inclusion on this highly collectable $1 coin is representative of the importance of remembrance to the RNZAF.

An RNZAF pilot from the past is shown in full flying gear at the forefront of the coin – standing out brilliantly in three dimensions in a detailed frosted finish. The dedicated personnel who commit their lives to serving the RNZAF, both in the air and on the ground, have been vital to its success in the past 75 years.

Featured around the inner rim of the coin are lines resembling an aircraft instrument that shows the flying height of an aircraft. Beautifully inscribed around the upper outer rim is the official celebration slogan: ‘Celebrating 75 years of service to New Zealand’. The lower outer rim features the words ‘Royal New Zealand Air Force’, adding to the authenticity and collectability of this commemorative coin issue.

The 75 Years of the RNZAF coin is beautifully presented alongside a finely crafted enamel pin, which depicts the official RNZAF badge. The pin is the perfect accompaniment to this official silver proof coin, and together they represent the heritage and tradition of the RNZAF.

2014 Scenic Definitives - A Tour of Niue Sheetlet of Cancelled Stamps