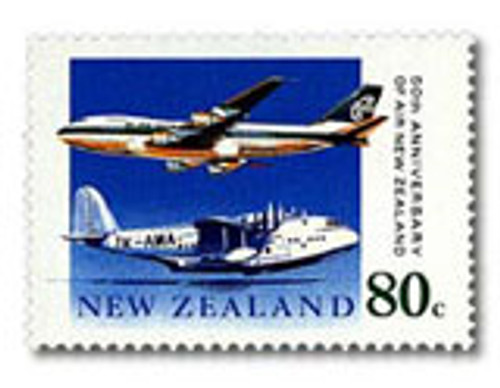 The last of the flying boats flew for TEAL in 1960 by which time the airline had become totally New Zealand owned and had been operating land-based aircraft for six years. In 1965 the name TEAL disappeared, replaced by Air New Zealand, a more appropriate designation for a carrier spreading its wings to destinations outside the Australia/South Pacific market.

For almost 40 years TEAL and Air New Zealand flew only international routes but that changed in 1978 when the airline merged with the domestic New Zealand carrier, National Airways Corporation (NAC).  NAC was formed in 1947 out of the nationalisation of three airlines. NAC's identity disappeared with the amalgamation and its mixed fleet of Boeing 737s and propjet Fokker Friendships soon began sporting Air New Zealand colours. Today, the distinctive Koru, a stylish version of a Maori symbol, graces the tail of a fleet of international and domestic aircraft.