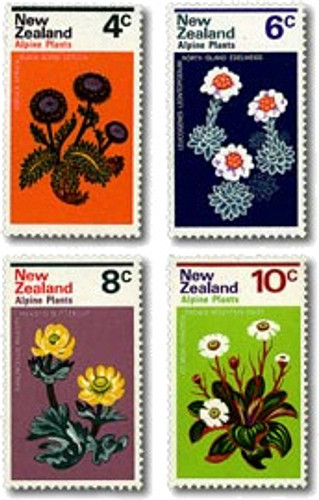 The Black Scree Cotula (Cotula atrata) - 4c
Found in Marlborough and Canterbury at heights of between 1,200 to 2,000 metres, this is one of the commonest scree plants in drier mountainous regions.  The flowers seem to be almost black with the pollen appearing as a ring of golden dots.

The North Island Edelweiss (Leucogenes Leontopodium) - 6c
Found from Mt Hikurangi near East Cape southwards to some localities of the South Island.  Its golden flower is surrounded by densely woolly white leaves make this plant conspicuous in stony alpine herbfields between 1,200 to 1,800 metres.

Haast's Buttercup (Ranunculus Haastii) - 8c
Found on screes (steep slopes of loose angular stones) from Nelson to Otago and Western Southland on the drier mountain slopes from 1,000 to 2,000 metres.  This buttercup has glistening flowers on thick stalks and succulent grey-green leaves.

The Brown Mountain Daisy (Celmisia Traversii) - 10c
Found on the mountains of Nelson and also in Fiordland mainly in moist, snow tussock herbfields between 900 to 1,500 metres.  The furrowed leaves are rich blue-green, felted beneath with russet wool.  The leaf stalks are purple while the flower stalks are clothed in russet wool.