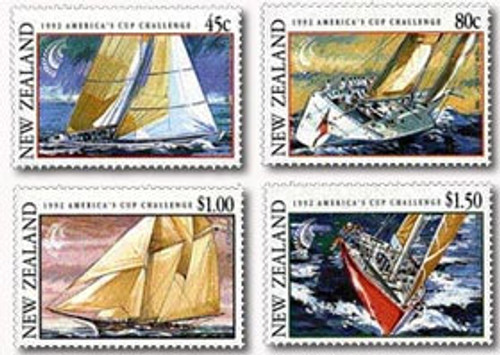 Between January and April 1992 New Zealand took on the world for the right to challenge the San Diego Yacht Club for the America's Cup.

The Mercury Bay Boating Club's 1992 New Zealand Challenge for the America's Cup was managed by Peter Blake, one of New Zealand's well-known sporting heroes, and included two of this country's most respected yachtsmen, David Barnes and Russell Coutts. The 1992 regatta was the 28th defence of the Cup, the symbol of international yachting supremacy. The America's Cup Challengers and Defender had agreed to compete in an entirely new class of yacht in 1992. The 75 foot high, high-tech International America's Cup Class (IACC) monohulls were longer, lighter, had more sail area and were probably 25 percent faster than the 12 metre yachts used between 1958 and 1987. Because of the combination of lightness, size and sail area, the physical demands on the 17 man crews were greater than they were with the 12 metre yachts.