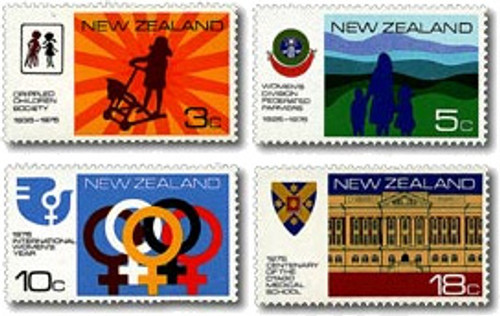 This 1975 Commemorative stamp issue commemorated the anniversaries identified below.

The New Zealand Crippled Children's Society (Inc) - 3c
The New Zealand Crippled Children's Society was founded in 1935, with the aim and object to see that every crippled child has the earliest possible treatment, followed where necessary with the most effective continuous care; to assist parents to a true understanding of the child's special needs, and to inspire hope and confidence both in parent and in child; to help each crippled child to obtain a sound vocational training, and so take his or her place in the community; and to encourage in employers an attitude favourable to the employment of cripples.

Women's Division Federated Farmers of New Zealand Inc - 5c
The movement began in 1925 when a group of 16 farmers' wives, on holiday in Wellington while their husbands were attending a conference of the Farmers' Union (now the Federated Farmers), became concerned with the hardships of farmers' wives and families living in isolated and backblock areas.  They formed a group which has now grown into the second largest women's organisation in New Zealand.  This organisation has its own emergency housekeeper service for country women in time of sickness.  Rest and holiday homes have been established throughout the country to enable country women to take a rest at moderate cost and in congenial surroundings.  Amongst these are "Scotlands" at Auckland, "Te Kiteroa" at Waimate, and "Melrose" at Nelson.

Centenary of the Otago Medical School - 18c
For the first 50 years or so of settlement, New Zealand's population relied entirely on doctors who had been trained overseas.  Today the majority of medical practitioners in this country have received their medical training in New Zealand.  The University of Otago was established by 1870, and in 1875 a medical school was in existence.  At first only the first two years of a medical course was provided with students having to complete their studies and obtain their medical qualifications at some other school of medicine.  From 1885 onwards it became possible to complete the whole medical course in Dunedin, and the first student to do so was William Ledingham Christie who qualified in 1887.  The first woman to complete the medical course at Dunedin was Emily Siedeberg.