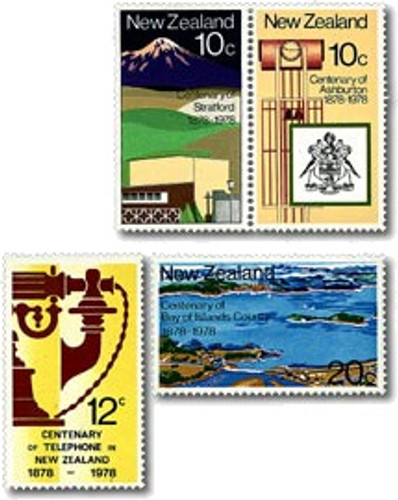 The 1978 Commemorative Stamp Issue honours the centenaries of two farming towns: Stratford and Ashburton; a sub-tropical county: the Bay of Islands; and the introduction of the telephone into New Zealand.

The 10c stamp was designed by Peter Durrant, the 12c by Peter Blackie and the 20c by Harrison & Sons Ltd.

Centenary of Stratford and Ashburton (two se tenant stamps) - 2 x 10c
Stratford is situated on the Patea River, 42 km south east of New Plymouth.  The main rural activity of the district is dairy farming associated with sheep raising.  Butter, cheese and casein are manufactured in the district.  Forestry has also developed into a main industry.

Centenary of the Telephone in New Zealand - 12c
Telephones were first used in New Zealand as an ancillary to the telegraph service.  The first exchanges were opened in 1881 at Christchurch and Auckland, Dunedin followed in 1882 and then Wellington in 1883.  But it was in 1913 that the first automatic exchange equipment supplemented the manual exchanges.  The first coin-in-slot telephones were tried in 1910 for local calls only and in 1938 multi coin slot telephones were installed for local and toll calls. Today the telephone is a major communications system.

Centenary of the Bay of Islands - 20c
A drowned-river system on the east coast of Northland between Whangarei and Whangaroa Harbours the Bay was visited by Kupe and Ngahue in the 10th century and Toi called there some 200 years later.  In 1769 Captain Cook was the first European to arrive, but it was the arrival of Marsden in December 1814 and the founding of the first mission at Rangihoua which marked the beginning of permanent European settlement in New Zealand.   Forestry is one of the major industries in the area along with orchards, farming and fishing.

2018 Round Kiwi Set of Used Stamps