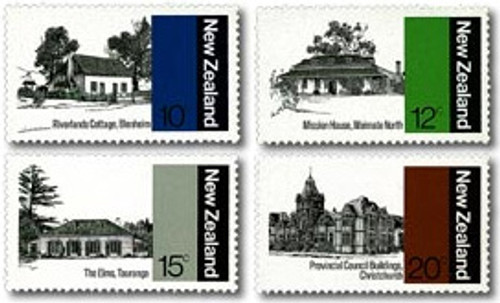 New Zealand architecture was the subject of this 1979 stamp issue.

Riverlands Cottage, Blenheim - 10c
Built about 1865 for Charles Redwood, son of a pioneering family.  Redwood arrived in New Zealand in 1842 and purchased the land in 1865.  The present cob cottage could date earlier than this since "squatting" was still a common practice in the 1860s.  Lack of suitable timber in Wairau forced the construction of the cob style house.  The cob walls were constructed from a mud and tussock mixture while the roof was made from wooden shingles.   Administered by the Marlborough Historical Society, interest in restoration of the cottage from its badly dilapidated state began in 1959.  It was opened to the public in 1965.

The Mission House, Waimate North - 12c
The only survivor of three church mission houses built at Waimate in 1831-1832.  For nine years it was occupied by George Clarke.  Home of Bishop Selwyn from 1842 to 1844, it was later known as the Old Vicarage and much altered in appearance.  Restored to its original Regency style by the New Zealand Historic Places Trust, it is furnished as a mission house of the 1830s and is open daily.

"The Elms" - 15c
Tauranga's historic Anglican Church mission house was completed in 1847 and was the centre of a mission station run by the Rev A N Brown until the middle 1880s.  When the late Miss Alice Maxwell came to the Elms in 1887, she set out to preserve the building as a memorial to the mission.  It stands today as a result of her guardianship almost unaltered except for the wood shingle roof which has been overlaid with corrugated iron.

The Provincial Council Buildings, Christchurch - 20c
Designed by Benjamin Mountfort and his partner Isaac Luck this building dates from 1859 when the first vertically-timbered wooden section was completed.  Designed by Mountfort on his own, the Council Chamber demonstrates the use of the cathedral style of Gothic revival for civic or secular purposes.  Though simple outside, the chamber has a colourful and lavishly decorated interior with a massive barrel ceiling, elaborately carved stone work, mosaic walls and stained glass windows.

Christmas 2020 Set of Barcode A Blocks