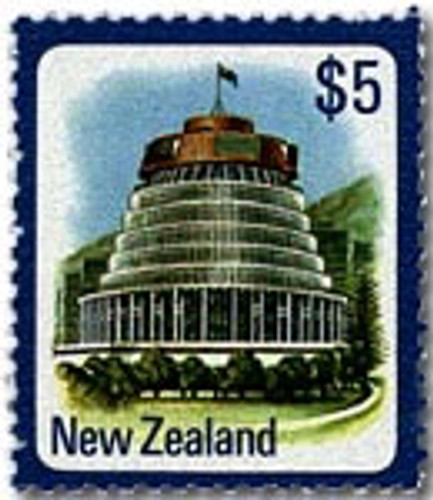 This $5.00 Definitive Stamp depicts the executive wing extension to Parliament Buildings in Wellington, commonly known as the "Beehive".

Only part of the original complex for New Zealand's Parliament Buildings was constructed, and these were occupied in 1918.  The complete design included a south wing, a dome over the main entrance hall and statuary.  In the early 1960s it was decided to provide a modern building as an extension of the old buildings, as the accommodation in Parliament Buildings had been inadequate for a number of years.

$5.00
The Beehive, designed by the New Zealand Government Architect from a concept proposed by prominent British architect, the late Sir Basil Spence, is a circular 11-storey building made of concrete faced with granite and marble, and has a copper roof.  As well as Ministerial offices, the Beehive contains a banqueting hall, Bellamy's restaurant, a cinema, the Prime Minister's suite and the Cabinet room.