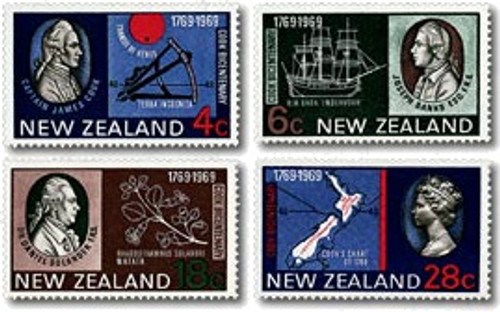 In 1769, Captain James Cook sailed from England for Tahiti on board the 'Endeavour' to observe for the Royal Society the transit of the planet Venus across the face of the sun. He then went on to make the first recorded landing by Europeans in New Zealand at what is now Gisborne, in Poverty Bay. The leader of the scientific party was Sir Joseph Banks and Dr David Solander was the botanist.

These stamps were issued to commemorate the bi-centenary of Captain Cook's first voyage to New Zealand.

Captain James Cook - 4c
This stamp depicts a side portrait of Captain Cook with the planet Venus crossing the sun together with an old navigational instrument, the octant.
Sir Joseph Banks - 6c
This stamp includes a portrait of the noted naturalist Sir Joseph Banks with an outline of the 'Endeavour'.
Dr Daniel Solander - 18c
Solander was the botanist aboard the 'Endeavour' and is illustrated together with a native plant bearing his name and locally know as matata.
Her Majesty Queen Elizabeth II - 28c
This stamp depicts a portrait of Queen Elizabeth II and Captain Cook's 1769 chart of New Zealand.
Miniature sheet - 56c
Incorporating each of the four stamps from this issue.